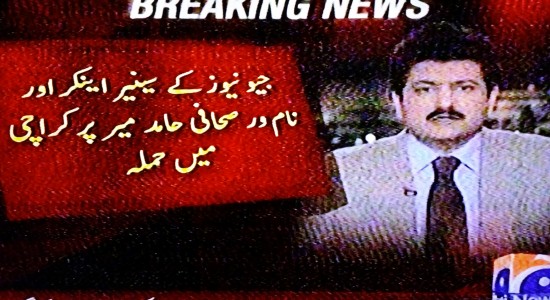 A round-up of statistics of press freedom violations, including attacks on media practitioners and media houses in Pakistan in 2014

The media in Pakistan has been under persistent attacks from a variety of quarters – including both state and non-state actors – over the past decade as the country transitioned first from military rule to representative dispensations and then consolidation of democracy. In the same period, a rise in extremism, violence and terrorism has deeply impacted society. Over 55,000 Pakistanis have been killed by terrorism. This includes over 100 journalists – the highest number in any single country for this period, aiding the country being ranked among the most dangerous on the planet to practice journalism.

The Year 2014 was not just no different from recent years, it was the deadliest ever for the media in Pakistan’s history. According to monitoring and analysis, conducted by Freedom Network, of violations against media in Pakistan in 2014, the following are, in brief, the cases documented:

Journalists, media assistants and bloggers killed in Pakistan in 2014: Total 14

Of these 4 were killed in Balochistan, 4 in Punjab, 2 in Khyber Pakhtunkhwa and 1 in Sindh.

Journalists and media assistants shot at and wounded in 2014: Total 4

Oct 24: Tribal journalist Amirzada Wasal from Jamrud tehsil of Khyber agency in FATA bordering Peshawar missing since this date from Ghunai area of Jamrud. He was still missing at the end of 2014.

Nov 7: Dera Bugti-based journalist Manzoor Ahmed Bugti goes missing from Quetta in Balochistan missing since this date. He was still missing at the end of 2014.

Journalists and media assistants attacked, threatened or harassed in 2014: Total 58

These cases include setting newspapers on fire, taking channels off air and stopping distribution of newspapers, attack on cable networks, etc.

Cases registered against media practitioners and owners in 2014: Total 4

Threat actors: Some of the identified forces that attacked, threatened or harassed media during 2014:

Five most serious cases of attacks on media in 2014:

Hamid Mir: Senior anchorperson for Geo News TV channel. He was attacked on April 19, 2014 minutes after landing in Karachi from Islamabad. He was shot at and received six bullets in his body. He was operated upon to remove four bullets while two still remained inside his body by the end of the year. The journalist’s family charged intelligence agency ISI chief Lt Gen Zaheerul Islam of masterminding the attack.

Irshad Mastoi: Bureau chief of Online news agency and assignment editor of ARY News TV channel. He was shot dead in his office in Quetta along with young Abdul Rasool, reporter, and Muhammad Younas, office accountant, by unidentified gunmen on August 28, 2014.

Raza Rumi: Political analyst, writer and TV anchor. He was attacked by unidentified gunmen in Lahore on March 28, 2014 as he driving home after conducting his TV show. While Rumi manage to survive, his driver, Mustafa, later succumbed to his wounds in a hospital while another guard sustained injuries.

Geo News TV: A well-organized campaign was launched to malign and punish Geo News channel after its prime talk-show host Hamid Mir was attacked in Karachi. The military, appearing extremely unhappy at the allegation by Mir and his channel that ISI masterminded the attack, got the channel banned for one month and fined Rs10 million for treason and also banned the channel in cantonment areas since then. Geo channel’s staff and vans were repeatedly attacked.

Express News TV: The channel has been targeted repeatedly in recent time. These attacks beginning in 2013 continued in 2014. Its Peshawar bureau chief Jamshed Bhagwan was thrice attacked when bombs were planted outside his residence. Three of the channel’s staffers were gunned down in Karachi with Tehrik-e-Taliban Pakistan dramatically calling live on one of its programs claiming responsibility for the attacks.

The author is a journalist and media rights activist. He is also Managing Director of Freedom Network. He can be reached at aurangzaib@fnpk.org and tweets at @aayzee