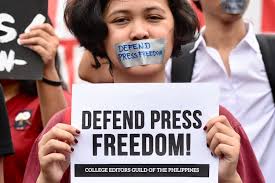 Five cases of attacks, injuries to two journalists, a legal case against a journalist and offline and online harassment were monitored and documented during July 2019 period under Pakistan Press Club Safety Hub Network, managed by media watchdog organization Freedom Network.

Among the five cases documented two each had taken place in Sindh and Islamabad respectively while remaining one case in Punjab province. There had been no violation in Khyber Pakhtunkhwa and Balochistan provinces.

On 1st July, Jang reporter Munsif Khawaja was attacked in Qayoomabad area of Karachi city. He was taken to hospital for treatment where his condition was stated out of danger. Police made some arrests after a complaint was registered. However, the complaint was withdrawn after the two parties reached a “compromise.”

ASSAULT: Intelligence personnel in plain cloths tortured Khursheed Ahmed, working for Khabrian newspaper and serves Gilgit Press Club as president, in Gilgit city on 17 July. The security personnel, according to local journalists, were unhappy with the reporter’s reporting. Local police were hesitant to register a case. However, the journalist reached a compromise with the personnel.

LEGAL CASE: Sonya Shahzad, working with Samaa News TV channel in Karachi office, was issued bailable arrest warrants after her report on harassment against a teacher of Karachi University. The reporter based her story on findings of Anti-Harassment Committee of the varsity. However, the teacher moved the court against the journalist to get complaint registered against her. The court of Judge Javed Haider Phulpoto allowed the complainant and issued bailable arrest warrant. The teacher took a plea that because of media coverage his father died.

ONLINE HARASSMENT: A fact-finding committee of Pakistan Federal Union of Journalists and National Press Club found 15 July the Federal Bureau of Revenue (FBR) notice to TV host Hamid Mir for allegedly having property in Dubai unfounded and baseless. The journalist denied the allegation before the committee and the FBR “tendered apology” the very next day. Online harassment of Hamid Mir stepped up using the FBR notice against the journalist who is seen as one of the fiercest critic of Prime Minister Imran Khan. 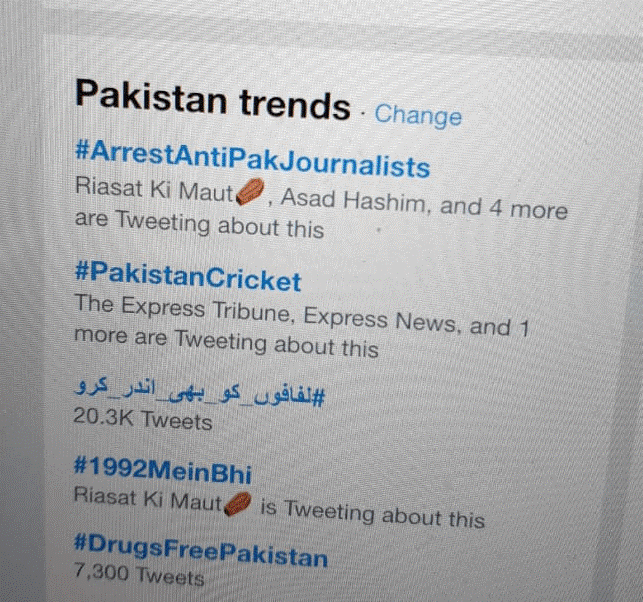 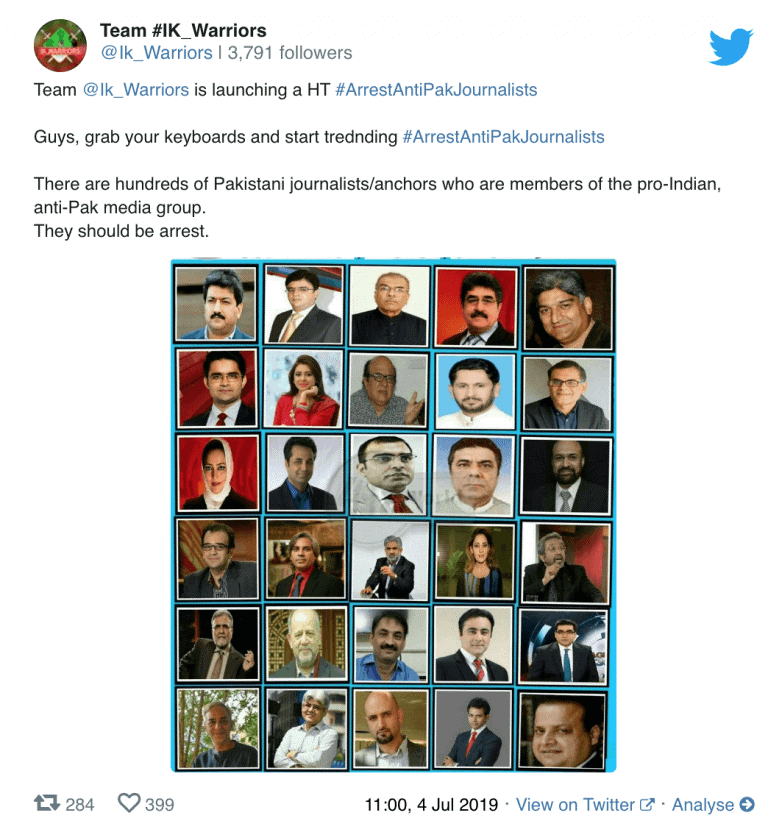 Figure 2 Screenshot of tweet bracketing independent journalists and writers as “pro-India, anti-Pak media group” and demanding “they should be arrest(ed)” and tweeted by pro-ruling Pakistan Tehreek-e-Insaf party.

The hashtag trend surfaced between 3 and 4 July and Digital Rights Monitor reported on 5 July that hashtag (#ArrestAntiPakJournalists) was observed trending on the 4th and 5th of July. Hundreds of human-bots contributed to the ‘trend’ with many thousand tweets, most of them containing vile, hateful and inciteful speech targeting a group of journalists who are known to be critical of the ruling party’s policies, especially the recent arrest of an opposition party’s leader over drug smuggling charges.

“The observed hashtag started trending after 11:00 AM on 4th July following a tweet from Team #IK_Warriors (@Ik_Warriors) announcing the “launch” of the hashtag “#ArrestAntiPakJournalists” and calling upon the followers to “grab the keyboard and start trending”, along with a picture of the journalists and anchorpersons alleged to be “the members of pro-India, anti-Pak media group,” Digital Rights Monitor reported.

CENSORSHIP: Four TV channels – Geo News, AbbTakk, 24 News and Capital News – were taken off cable networks across Pakistan for unknown reasons during July 2019. Geo News channel was off cable networks abruptly on July 21 – a day after elections in Khyber Pakhtunkhwa’s tribal districts on 20 July. On 8 July, Abbtakk, 24 News and Capital News TV channels were unavailable on the country’s cable networks and restored hours later. No official explanation was given by the government but these channels believed they were “punished” for live reporting of opposition leader Ms Maryam Nawaz Sharif’s press conference in Lahore on 6 July producing a leaked video about a judge who convicted her father former prime minister Nawaz Sharif.

On 1st July, interview of former president Asif Ali Zardari who is also leader of Pakistan People’s Party was pulled from air on Geo News channel and its interviewer Hamid Mir said the interview was stopped by the government of Prime Minister Nawaz Sharif.

In all five cases, state actors, a criminal gang and others’ involvement was reported and suspected.