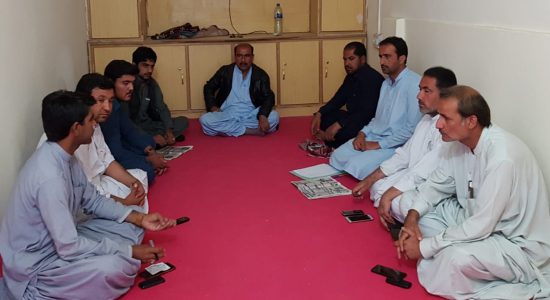 Balochistan has been one of the most turbulent regions of Pakistan in the last decade. The violence also took its toll on journalism in the province. Since the beginning of the conflict in 2005 more than 30 journalists have been killed. Apart from this, there has been countless other intimidations, attacks and abductions attempts against journalists. Thankfully, Balochistan is calm this year in terms of attacks on journalists. This is surprising and needs to be explored. It needs to be seen if this calmness is temporary or permanent?

There has not been any physical attack in Baloch belt of the province since January this year. In July, Zaibdar Marri, president of Kohlu Press Club, was abducted in the run-up to the election and later released. Barring that incident which is related to internal political dynamics of Kohlu, journalists in Baloch belt have been heaving a sigh of relief.

Freedom Network attempted to explore the reasons behind the calmness. The first reason could be that journalists have started opting for self-censorship. They are now familiar with their boundaries on certain issues. In the past they came under attack for reporting such issues but now they simply avoid them. Consequently, there are no attacks. However, journalists unnervingly understand that the boundaries of what they can cover and can’t cover are not yet clear.

Ali Raza Rind is a journalist based in Dalbandin town and believes that presently there are no physical threats for journalists in Chagai district. However, he concedes that journalists have given up covering ‘sensitive issues’ resulting in temporary amity. “We as journalists can’t cover issues relating to missing persons and border deployments,” he told the Freedom Network. He makes no qualms about the fact that journalists have learned now to self-censor to survive.

The second reason, as per the Freedom Network findings, is that the management of media organizations do not broadcast or publish ‘negative news’ from Balochistan. Even if a journalist reports on issues which portray a negative image of the province or someone then those reports are not published or broadcast by their managements. This has also resulted in journalists not earning the ire of the people who might hurt them for publishing ‘negative news.’

Sadaqat Baloch works as a journalist in the port city of Gwadar. He complains that his channel management discourages any report which presents a negative picture of the strategic city. Mr Baloch, who also happens to be the president of Gwadar Press Club, told the Freedom Network that “I have worked on many reports, highlighting the plight of people of Gwadar in the wake of CPEC, but the media organisation found one reason or another not to broadcast those reports.” He suspects that his channel intentionally avoids critical reporting of Gwadar.

Shahzada Zulfiqar, former president of Balochistan Union of Journalists, believes that media in the province has been neutralized. “Media was not free, to begin with, in Balochistan but now it has been beaten into submission and hence we have temporary solace,” he told the Freedom Network. He further adds that in the past insurgents attacked media when journalists did not publish their statements but now even insurgents have realized that journalists are powerless. “Media owners have surrendered before the powerful forces and they do not come for the rescue of the journalist and hence journalists also do not take risks,” He claims.

Another reason for calmness is that not many people are entering journalism anymore. The profession used to be aspiring for young people but consistent attacks on media have for them made journalism a dangerous profession. Now, youngsters avoid becoming journalists because they know about the fate of over 30 dead journalists. Habitually newcomers are the most adventurous lot; in their absence there is not much creative or provocative reporting.

The situation in Gwadar also reiterates the assertion that youngsters avoid journalism. Mr Baloch complains that students from Gwadar who graduate in mass communication do not take up the profession anymore. They look for other jobs and prefer to stay unemployed for a while rather than join the profession, which is perceived as dangerous. “In last 5 years only two new journalists have joined Gwadar Press Club despite it being the center of attention due to CPEC,” Mr Baloch laments.

One thing is quite clear that calmness in the Baloch belt is not due to improvement in the security situation. It seems the calmness is temporary and there is no guarantee a journalist will not be targeted again. Likewise, even seasoned journalists can make mistakes and can end up inviting trouble for any brave reporting. One thing is for sure that journalists know this very well that threats to journalism are far from over forever.