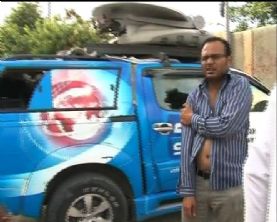 In a major act of censorship, the Pakistan government enforced a blanket blackout of news and current TV channels as well as a shutdown of several popular social media platforms spread over November 25 and 26, 2017 in an attempt to prevent media coverage of political protests and access to information online.

The shutdown included 24/7 current affairs and news channels on cable network, Twitter, Facebook, YouTube sites for 28 hours to clamp total blackout of information hours after police and other law enforcing agencies began a security operation on November 25, 2017 – against supporters of a religious group demanding resignation of a federal law minister over blasphemy charges.

“State enforced mass censorship and cutting off access to sources of information is unacceptable as it infringes on constitutional guarantees of the right to freedom of expression and access to information,” Freedom Network, the Pakistan-based media watchdog said on November 27, 2017 in its #PressFreedomAlert.

If there was a danger of inflammatory media coverage, the government could have taken other administrative decisions to enforce Code of Conduct for electronic media while covering security operation to restore public order, it added. “But resorting to extreme step speaks of mala fide intention of the government to deny public access to information.”

Over a dozen of journalists were reported attacked while covering sits-in of these supporters of the religious group in Rawalpindi city near Islamabad and Karachi city. “About 15-20 protestors were involved in beating me up,” Yasin Hashmi, reporter for Business Plus channel said in his audio message. The journalist received eight stitches in his head.

In Karachi, senior journalist Tariq Abul Hasan of Geo News channel, was attacked when he was covering sit-in of supporters of the same religious group.

Cable network and other social networks were restored Sunday evening – November 26, 2017 – 28 hours after they were suspended following Pakistan Electronic Media Regulatory Authority (PEMRA) ordered taking 24/7 current affairs and news channels off cable network for what it called “violating” code of conduct while covering the “security operation.”

The PEMRA notification ordered channels to abide by Clause 8 (8) of the Electronic Media (Programmes and Advertisement) Code of Conduct 2015, to show “utmost sensitivity” and refrain from coverage of the operation.

It issued guidelines for media to follow while covering “security operation” and blamed media for ignoring these.

Only WhatsApp was working to let public get information about security situation arising out from the operation about the Islamists from each other.

Pakistan Federal Union of Journalists (PFUJ) denounced the government action to clamp complete information black hole across Pakistan. “This is a draconian order and very much the violation of Article 19 A of the Constitution,” Ayub Jan Sarhandi, the secretary general of the PFUJ, said in a statement.