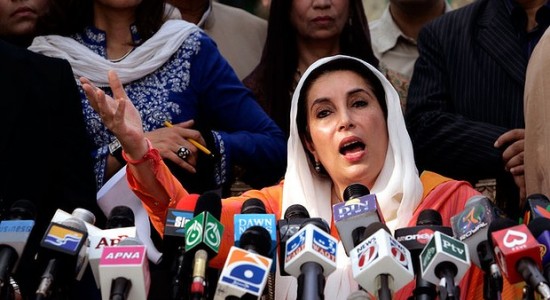 “Mazhar, I was shocked to see the list of journalists on the payroll of intelligence agencies. It included names of people, whom I thought were my supporters,” she told me almost a year after she was sworn in as the first woman prime minister of the Islamic world, in 1988.

Yes, it was late Benazir Bhutto, whom I had a privilege covering as a journalist for almost 30 years, since her first appearance before a military court in the early 1980s. She always had a ‘love-hate’ relationship with the media. Once she had even accused Military Intelligence for providing stories to the media.

In a press conference, Benazir did not even spare a prominent journalist, when she said, “an army official gave Unar’s fabricated story to you.” It was in reference to the allegations that on the directives of her husband Asif Ali Zardari, a businessman named Bokhari was kidnapped and a bomb was tied up with his legs to extract ransom from him.

Later, I reminded Benazir that two years back (when she first became the prime minister in 1988) she was supposed to dig out the list of journalists and columnists, on the alleged payroll of intelligence agencies, whether ISI [Inter-Services Intelligence], MI [Military Intelligence] or IB [Intelligence Bureau]. During a post-press conference conversation she said, “I did and was shocked.”

“But you never shared the list with me, if you had seen it and as you had promised,” I said. “Yes, I wanted to but was told by agencies not to share it with anyone as it’s a secret. It was shocking to see some of the names in the list,” she added, visibly pained.

Benazir, however, disclosed to me that some of the prominent names included those whom she considered her supporters as they had written many good articles about her government’s performance. “I wondered whether the agencies showed me the correct list or misguided me like they did on some other matters as well,” she said.

I replied: “I can’t say much because you had not shared the list, but why do you think that those who wrote a few good columns about you and your government were your friends? They might have been planted for this very purpose in order to misinform or misguide you. This is the mistake which Bhutto Sahib had also committed. You must consider your critics as your friends and should not treat them as your opponents.”

This conversation continued for about 25 minutes. She promised that if given chance again she would be more careful in handling the media. Unfortunately, when leaders become rulers they tend to forget promises made while in the opposition.

When she became the prime minister for a second time in 1993, she picked a person for ‘secretary information’ who as closest aide of Nawaz Sharif, in the mid-1980s played a key role in a scandalous smear campaign against her in the 1988 elections including the poster showing Begum Nusrat Bhutto, dancing with the former US President, Gerald Ford with unsavory slogans. The posters were dropped from helicopters in different parts of Punjab. Once, when I asked him about it when he became close to Benazir, he said, “It was the idea of [former ISI chief] General Hameed Gul.” He never returned to the Sharif camp again but perhaps went too far and now it is even difficult for him to return to his homeland.

Similarly, Bhutto constituted a ‘Media Cell’ in Karachi, which operated from the Sindh Information Department, Government of Sindh. Interestingly, among the few included in the cell was the one who also in the close circles of Sharif.

My interaction with Bhutto continued and once she even asked me to join her party and become Senator at the Karachi Press Club. I politely turned down her request and said I am happy as a journalist as I always opposed journalists and columnists who used this profession as a stepping stone to politics.

Benazir Bhutto was very kind to me but I never joined her media team nor went abroad with her on any official tour. She was kind enough to invite me to address the Federal Cabinet on the issue of ‘Wage Board Award’ and problems faced by the journalists in 1994. Perhaps, I was the only journalist, who has ever addressed the federal cabinet thus.

I have a lot of good memories of Benazir Bhutto ever since she was first brought to a military court to record her statement as a defense witness in the famous ‘Jam Saqi Case’ of sedition against seven communist leaders. She was under house arrest, in the early 1980s, but was produced under tight security.

The only journalist who managed to enter the closed court proceedings at the KMC complex, Kashmir Road, was a BBC correspondent, who recorded her initial three questions before she was asked to leave. The Qs & As, were: (1) What is your name? Answer: Benazir Bhutto, (2) What is your father’s name? Answer: Zulfiqar Ali Bhutto, and (3) What is your caste? Answer: “I don’t believe in castes.”

The last time I met her was a few days before she was assassinated in Rawalpindi on the cold December 27 evening in 2007. She was full of life, as always. She was charismatic, intelligent and brave, who fell in a great trap laid out for her.

Those who travelled with her from Dubai on October 18, 2007 as she returned from an exile of seven years also included journalists, a majority of whom did not warn her about the dangers and specific threats to her life. One wonders whether they were among those whose names were on the ‘secret list’ that she had seen and told me about and I wish she had shared with me.

The author is the former Secretary General of Pakistan Federal Union of Journalists and a seasoned journalist.