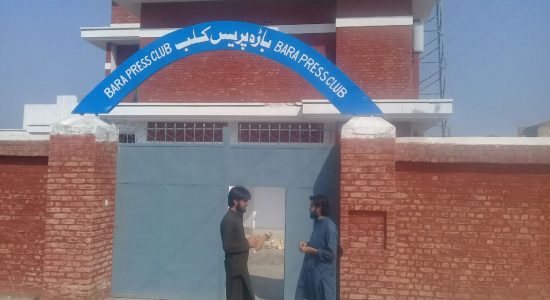 The construction of Bara Press Club was completed in early 2009 only when it was shut down in September the same year after the start of a military operation against Taliban-linked militants in almost all parts of Bara, except Tirah valley, in Khyber tribal region bordering Peshawar and Afghanistan.

Situated on an acquired land of about 20 marlas adjacent to the historic Bara bazaar, the building consisted of offices for president and general secretary, two conference halls, a kitchen, lavatories, a terrace on first floor and a small compound on the ground.

But local journalists were unfortunate not to utilize the facility which they had been demanding since early 2000 as the situation in Bara was not conducive for performance of journalistic activities due to influence of militant groups and later the start of military operation against these outlawed groups  on September 1, 2009.

Most of the Bara journalists out of the total 25 had to shift to Peshawar for personal security and remained as displaced persons till the return of other IDPs of Bara in early 2004. The IDPs return provided a glimmer of hope to local journalists to reopen the newly constructed press club which remained under the occupation of security forces during nearly five years of military operations.

Local journalists hopes were further strengthened when Bara bazaar was reopened in early 2016 and they intensified their demand for reactivation of their press club. Submitting to these repeated calls and demands by the Bara journalists, the political administration persuaded the security forces to vacate the building in mid 2016 and later handed it over to local journalists after necessary repair and maintenance.

Immediately after taking control of the building, Bara journalists formed a committee to revive their journalistic activities and also put forth their demands to the political administration about some of their basic needs and requirements.

Ali Akhtar Afridi, a young budding journalist said that though the reopening of the Bara press club provided them an opportunity to perform their professional responsibilities in an organized manner but the building was still without electricity, water and modern equipments.

“We also do not have internet or DSL facility as the telephone exchange in Bara was totally destroyed by militants prior to the start of military operation and is not yet made operational”, he informed.

Hussain Afridi, president of Bara press club said that though the building was reopened in 2016 but it was yet to be formally inaugurated for which he and his cabinet had sent a number of requests to the officials of political administration.

He said that he wanted to show to the concerned officials the shortcomings the local journalists face even after reopening of the facility. “We use to travel to Peshawar and Jamrud for filing of our reports during the seven long years of our press club closure but the problems still exists due to lack of basic facilities like electricity, computer systems, printing machines and above all a dependable and constant internet service”, he said.

Khadim Khan Afridi, a radio journalist was of the opinion that the reopening have at least provided them an opportunity to sit together in a safer environment and discuss local issues and developing stories. “Prior to the reopening of this facility, we all were working independent of each other and were not able to share our professional experience”, he said and adding that now we feel more closer to our people and colleagues than before.

Islam Gul Afridi, also a journalist and whose family donated the land to the press club insisted that a functional press club was a dire need of the people of Bara as they had been clamoring for fulfillment of their demands since the return of most of IDPs.

“Journalists gave a voice to the oppressed and needy people of a certain region and for this to do, they need a peaceful environment with equal facilities”, he insisted and saying that ten long years of militancy and subsequent military operations had adversely affected the entire infrastructure of Bara along with badly disturbing the daily life of local residents.

“People of Bara wanted their voices to be heard and their demands fulfilled for which they needed a well equipped platform in the shape of an organized press club”, he added.

Khiyal Mat Shah Afridi, a journalist and a moving spirit behind the revival of the Bara press club termed it a healthy sign that local journalists were now frequently visiting the press club for the performance of their professional responsibilities.

“We are under professional obligation to highlight the issues and problems confronted by the people of Bara in the aftermath of the completion of military operations and restoration of peace in the region”, he said while adding that local people expect Bara journalists to keep an eye on the judicious execution of development schemes pledged as part of the rehabilitation of Bara after successful culmination of military operations.

He however repeated that their biggest handicaps were the absence of power supply, non provision of internet service and shortage of drinking water.

Murad Saqi, a political activist believed that a functional and well equipped Bara press club will help promote political awareness among the people of Bara alongside highlighting the genuine problems of local residents.