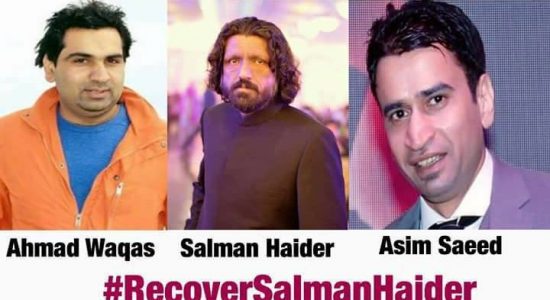 The years 2015 and 2016 were bad enough for social media activism in Pakistan – activists Sabeen Mahmud and Khurram Zaki paid with their lives for being outspoken. But 2017 has begun with an ominous start. In January 2017, five bloggers and digital activists, who operated popular social media platforms professing progressive and secular perspectives, went missing, triggering a storm of reaction from supporters – including fear, trepidation and anger – across online and mainstream media in the country. Anecdotal evidence, the method of ‘enforced disappearance’ and oblique references from the federal interior authorities indicate the bloggers were kidnapped by state security authorities even though they do not confirm this.

Fierce and rabid reactions from groups that are seen as close to the State’s religious and political doctrines justifying the ‘action’ against the bloggers and digital activists, and their relentless threats and propaganda against the defenders of those who have gone missing, seems to indicate the State is becoming intolerant to broad freedom of expression in Pakistan’s online spaces. Fear now stalks the Pakistani cyberspace as threats and intimidation against anyone who defends the ‘disappeared’ bloggers and activists have grown and become vicious, seriously affecting openness and pluralistic discourse.

Considering the high degrees of constraints on print and electronic media in accommodating progressive and secular points of view traditionally, the online space has over the past several years provided Pakistanis a more pluralistic and inclusive domain to communicate their concerns, ideas and perspectives. Large numbers of citizens, mostly young, not being able to connect with biased, polarized and overtly political soundbites in the mainstream media, have gravitated online to find a more connected space.

In terms of sheer numbers, of the 192m Pakistanis, over 39m were using the internet at the close of 2016 (a full one percent of the world’s share), which included 27m on Facebook. While no official data is available for Twitter users in Pakistan, over 4.5m tweets are issued from Pakistan every month. An overwhelming majority of internet users in Pakistan use social media platform actively. Social media has emerged for them as the principal platform for freedom of expression with individuals posting their views and opinions on anything and everything.

However, with the action against the bloggers, it appears that the high levels of intolerance for progressive and pluralistic perspectives in mainstream (offline) media have now seeped into the online world as well. Apart from the murders of Ms Mahmud and Mr Zaki – known for their active secular and progressive advocacy online – there has been a discernibly steady increase in the scope and scale of intimidation that civil society groups, human rights defenders and digital rights activists are facing online from both state authorities and conservative sections of society.

Pakistani cyberspace has now decidedly become as dangerous for its netizens who take their Constitutional Article 19 guarantee of freedom of expression seriously as those in the offline world. It appears that nobody who dissents with official doctrines of national security narratives is safe online anymore – the ability to engage with friends and to be able to express yourself freely is diminishing. It has become easy to accuse dissenters in cyberspace of blasphemy and treason, which usually have calamitous consequences for people offline.

Bloggers and digital activists Salman Haider, Waqas Goraya, Asim Saeed, Ahmed Raza and Samar Abbas, who ‘disappeared’ in early January 2017, now face these grave charges online from their detractors for being too liberal and expressing uncensored opinions and running popular social media platforms, which have since been taken down. Their unmitigated plight now serves to promote an intense climate of fear and intimidation online that is increasingly silencing progressive communities online and stifling dissent and debate in Pakistan.

About the author: Adnan Rehmat is a media analyst. He can be reached at adrehmat@gmail.com