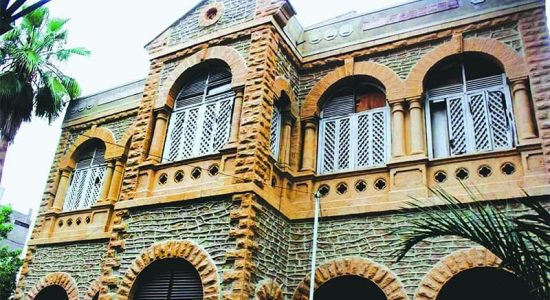 “We are shocked by such brazen violation of sanctity of Karachi Press Club, the country’s prestigious centre of journalism. We cannot believe what a senior Karachi Police official told the Club’s management unless an independent investigation is ordered by the Sindh government,” Freedom Network [FN], Pakistan’s first media watchdog organization, said 09 November 2018 in a Press Freedom Alert.

“Incident like this aims to scare away the journalists and the media houses as the country is among top 10 dangerous countries for journalism. Freedom Network calls on Sindh Chief Minister Murad Ali Shah to order a judicial inquiry into why such high-degree of harassment of journalists has taken place in Karachi,” the alert read.

A statement from the Karachi Press Club said” “Dozens of gunmen in plainclothes entered the KPC at 10:30pm, harassed journalists, examined different rooms, kitchen, upper floor of the building and sports hall. They forcibly made videos and took pictures with mobile cameras.”

It was a violation of sanctity, the club’s president, Ahmed Khan Malik, and secretary Maqsood Yusufi said in the statement, of the club and urged the governor and the chief minister of Sindh province to order an inquiry and take action against the “intruders.” 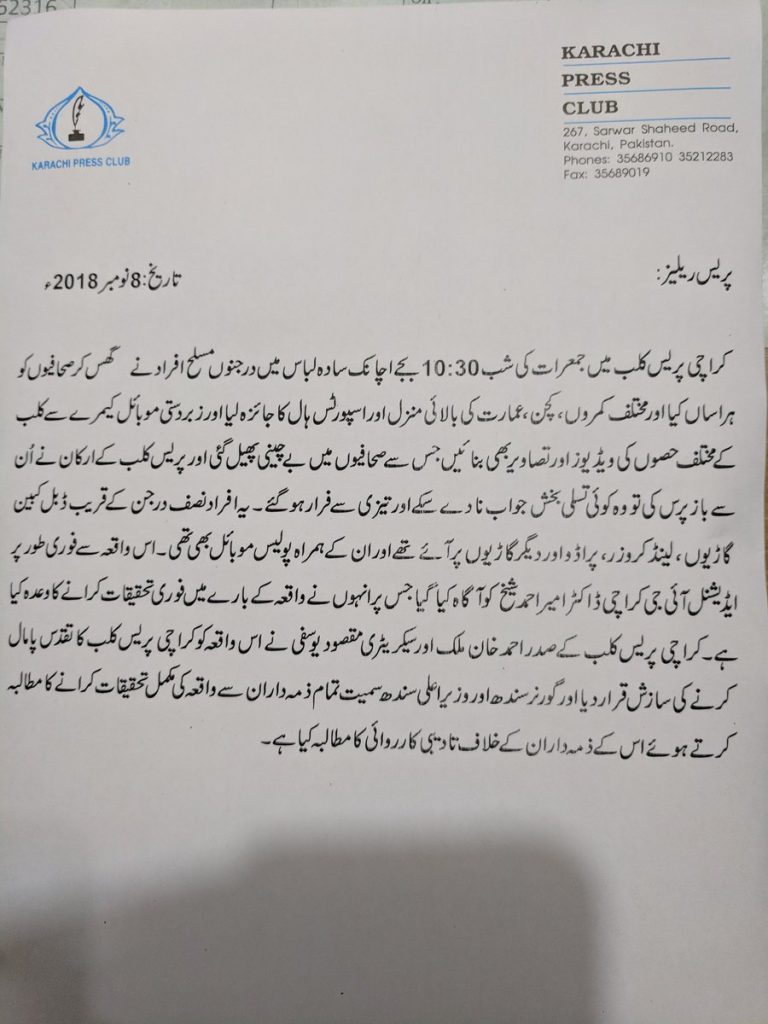 A senior Karachi police officer, according to the KPC member, told the president of the Club that the intruders were looking for wanted men and they might not have known the place they were going to search was the Karachi Press Club.

“The story is bigger than what the police official made narrated effortlessly. There is greater conspiracy to believe than simple ignorance of the raiding party,” said a senior member of the club wishing not to be named.

The incident caused concern among journalists and when some of the KPC members inquired about them, they did not get any satisfactory reply, the statement went on to say.

The armed men came in at least six double-cabin vehicles, land cruisers, Prado and other vehicles, besides a police mobile, it read.

The KPC office-bearers immediately informed Additional IG Karachi, Dr Amir Ahmed Shaikh, about the incident. He assured them of an immediate inquiry.

Sources said the raiding party was given support by the Karachi Police and Sindh government should make details of these intruding armed men public.

Freedom Network supports the journalists’ call for a protest on Friday (09 November 2018) afternoon against the incident.