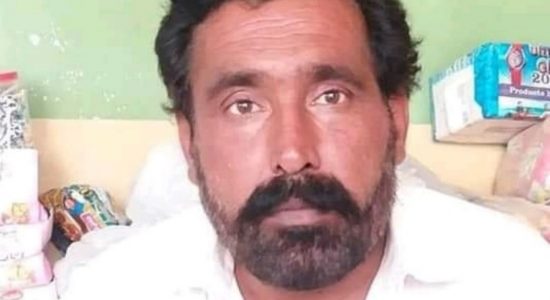 A total of 13 cases of violations were reported during this period. Punjab topped the list where five violations reported and followed by Sindh (three) and Khyber Pakhtunkhwa and Islamabad two violations each and one in Balochistan.

KILLED: Malik Amanullah Gharoka, working for local daily Nizam-e-Adil or ‘System of Justice’ was shot dead in jurisdiction of Parova police station in southern Dera Ismail Khan district of Khyber Pakhtunkhwa province by unidentified gunmen riding motorcycle on 30 April 2019. He was the first casualty in 2019. No group has claimed any responsibility for the reporter’s murder. According to medical report, the journalist received four bullets in face and shoulder areas. He died on the spot.

The family said it had no personal dispute with anyone. Muhammad Sohail Gangohi, chief editor of Nizam-e-Adl, told Freedom Network that late Gharoka was “extremely brave” journalist and he “never compromised” on highlighting social and political issues of his area. Parova is infested with crimes and a local journalist moved to Dera city after he found himself “vulnerable” in the area.

ABDUCTION: AbbTakk TV channel cameraman Ali Mubashar Naqvi was abducted from car parking area of his channel office in Karachi on 01 April 2019 by unidentified motorists. The journalist has not yet returned home despite one month since his disappearance. Local police denies having taken him away while Karachi Press Club and Karachi Union of Journalists are protesting against the abduction of Naqvi. He is the second journalist abducted from the city after Matloob Hussain Mosavi, Jang newspaper’s reporter who was abducted on 30 March 2019 from his residence in Karachi. Mosavi is also still missing.

INJURED: BOL News channel’s reporter Mudassar Kazmi was attacked on 29 April 2019 after his reports on drug-peddling in Chinior district of Punjab province. The reporter was on his way to Rajua from Chiniot after coverage when a criminal gang members intercepted him. They attacked the reporter with spade and club. The reporter received deep wounds and his shoulder was broken. The criminals escaped from the scene and warned him not to report news against the drug-pushers in the area. They told the reporter they would kill him if he did not stop his coverage. 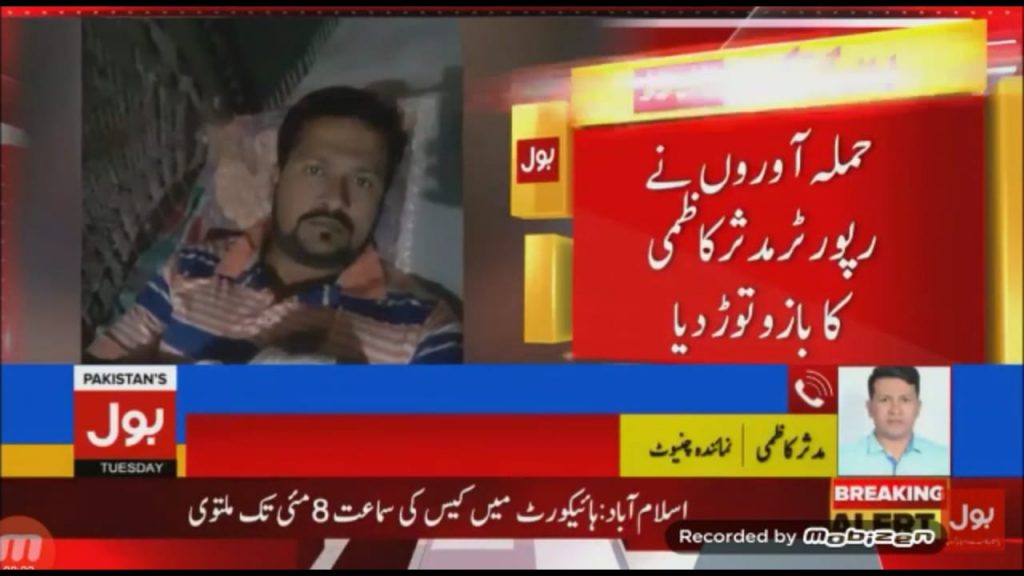 Rizwan Rafique Minhas, working for Dunya News TV channel in Kot Momon, Sargodha, was harassed on 26 April 2019 after he made footage of doctors of Tehsil Headquarters in Kot Momin on complaints of patients admitted there. When doctors knew that a journalist had filmed them peon Saqib and other officials of the hospital followed the reporter and got hold of him in the parking area as he was leaving the hospital. The hospital staff snatched his mobile phone and broke it so the reporter could not send footage to his channel. They started beating him and threatened him not to come again in the hospital.

OFFLINE HARASSMENT: Muhammad Tufail, reporter of SUCH TV channel in remote Rajanpur district, was harassed at a government hospital as he was covering the dead of patient in Labour Ward. Medical superintendent of the hospital called guards to prevent the reporter from the coverage. The guards attacked the reporter snatching his camera as well. “I would break your legs if next time you come here for coverage,” the reporter quoted the superintendent as telling him.

On 27 April 2019, Counter-Terrorism Department (CTD) Police in Karachi harassed TV One channel’s court reporter Shokat Korai when he was on duty on Sindh High Court premises. The CTD police snatched his mobile phone the reporter was using to film the scene and tore up his dress as well. Court reporters submitted complaint with registrar with Sindh High Court against the CTD personnel. The agitating journalists later met Sindh government’s adviser on media and he promised action would be taken against the CTD personnel.

On 10 April 2019, a female journalist (name withheld for personal reason) working for BOL News TV channel in Quetta bureau was harassed by doctors at Sandeman Hospital as she was on duty. “I was verbally harassed and threatened,” she told Freedom Network. Balochistan Union of Journalists condemned the colleague’s harassment and announced boycott of doctors’ press conference.

VERBAL THREATS: Sher Ali Sanjrani, reporter of Dhoom TV channel in Rajanpur district of Punjab province, run away to save life after an alleged smuggler of Iranian oil threatened the journalist who went to seek his views of the story he was doing on Iranian oil smuggling. “He got angry as I asked him what he thinks of smuggling allegations against him,” the journalist told his colleagues.

Young journalist Ali Akhtar Afridi from Bara town in Khyber district of Khyber Pakhtunkhwa province received threats at the hands of intelligence agency and job loss job by his employer after his report critical of intelligence-based operation against suspected terrorists in Hayatabad residential district on 16 April 2019. The reporter’s report was not published but Daily Subh newspaper published an ad to dismiss him from job while his report was not published. The intelligence people handed him 16-page questionnaire to fill and “softly advised” him to refrain from such “critical reporting.” The journalist is taken to social media pages to report his area now.

ONLINE HARASSMENT: Geo News channel’s Arshad Waheed Chaudhry faced online harassment after he asked Pakistan People’s Party chairman Bilawal Bhutto Zardari a question about performance of Pakistan Tehreek-e-Insaf (PTI) government performance on 25 April 2019. The PTI workers and leadership accused the journalist of asking a “planted question” from the PPP leader and they launched character assassination campaign against Chaudhry on social media to harass him. The National Press Club management issued a press release and warned the concerned to refrain from online harassment of the journalist.

LEGAL CASES: Journalists continue to face legal cases under controversial PECA law and latest casualty is senior Karachi-based journalist Shahzaib Jilani who was dragged into court case on 6 April 2019 by registering an FIR against him for his tweet and TV reports he made for Dunay News channel’s ‘Dunya Kamran Khan Kay Saath” show. The journalist denies doing any wrongdoing and says he exercised his right-to-express himself on social media platform. The programme which is made ground for the FIR was telecast in December 2017. The journalist secured his pre-arrest bail, meanwhile. The FIR was registered on complaint of Moulvi Muhammad Iqbal Haider who said that Jillani uttered ‘articulated defamatory remarks’ against institutions of Pakistan during a talk-show on Dunya News channel. The irony is the organization extended no moral support to the journalist.

On 26 April 2019, Authorities in Sukkur district of Sindh province sealed Sukkur Press Club after the Sindh High Court order stating that the club building was constructed on land reserved for a park. The club management and senior journalists contested the claim saying if the building was “illegal” why the Sindh government was sanctioning annual grants for the press club. Local authorities recommended construction of press club building on another site. The press club is dysfunctional and no journalism-related activities are allowed on the current premises.

Rawalpindi-based Express News TV channel’s reporter Imran Asghar was served legal notice on different dates by three SHOs of different police stations in Rawalpindi on the direction of Central Police Officer Rawalpindi Ahsan Abbas after releasing video of PTI MPA Ijaz Khan Jazi who blamed the CPO allegedly involved in getting bribes on appointment of SHOs in Rawalpindi. The allegation went on-air on 2 April 2019. Crime reporters’ body announced police coverage boycott unless the notices were withdrawn as they were “mala fide.” Later, the two sides reached agreement and police officers withdrew the notices.

Ten journalists who faced different threat categories during April 2019 belonged to TV channels while three worked for print media. The murdered journalist was from the print media.

In eight cases, state authorities were reported involved whereas in murder and abduction cases the perpetrators of the crimes remained unknown. In two cases, Pakistan Tehreek-e-Insaf and Pakistan Muslim League (Q) supporters were involved to harass and attack two journalists respectively.