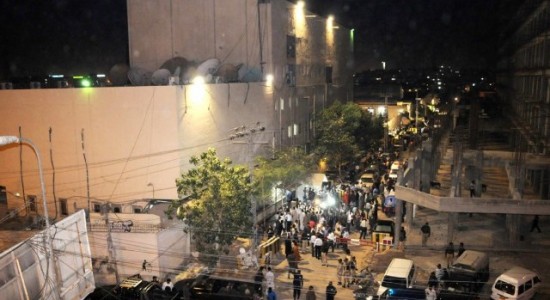 Alliance for Access, a nationwide coalition of civil society organizations, corporations, media houses, telecommunication companies, academics, and student groups to promote open access in Pakistan, condemned the attack on offices of Express Group, one of the country’s leading media houses, in Karachi on Monday evening.

This is the second attack on the offices of this media group in four months.

“Express News Group has been consistently under threat and the attack follows a threatening statement from Tehreek-e-Taliban Pakistan against media groups and journalists in Pakistan,” the Alliance said Tuesday in a joint press statement.

Express Media is an integral part of the Alliance for Access with their strong commitment and support for freedom of expression and speech in Pakistan, and “we appalled and disappointed by the lack of security provided to the Express Group offices in Karachi, despite being under constant threat.”

Journalists affiliated with the Express Tribune and those on site reported that the police van usually present at site had been removed a few weeks ago. “This is an attack on independent and progressive reporting in Pakistan,” the Alliance declared.

International human rights community have urged the government to commit to end impunity and make public their commitment to free media and safety of journalists across the country.The attack on Express media group comes as a bleak reminder of the dangers and threats journalists face simply for doing their job. The state must take immediate action to fulfil its commitment to protect civilians, especially those on frontlines.