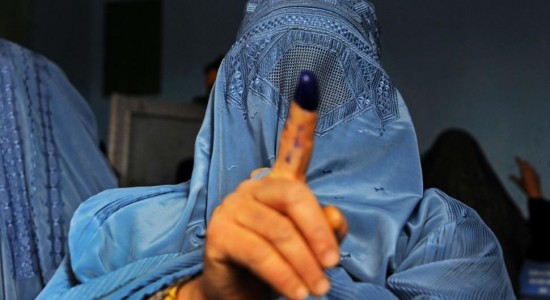 Few in Afghanistan will question the positive role local media played in bringing seven million voters to the polling stations in the April 5, 2014 presidential and provincial elections. No doubt it has weaknesses of its own, but the mere fact that absence of the maddening race for ‘breaking news’ and blood pressure-raising tickers, makes Afghan electronic media look and sound more somber and mature.

On the polling day, Afghan television channels raised people’s confidence by reporting long queues. Though the Afghan Taliban claimed carrying over a thousand attacks across the landlocked country, the mainstream media preferred not to give space to such discouraging propaganda and news – a clear agenda setting in national interest. As someone who was in the country for coverage of elections, I’m told some government pressure was also responsible for a complete blackout. Compare this with Pakistan and the local militants have been quiet ingenuous in getting space for themselves in the media through threats, intimidation and even murder of journalists.

After the polling was over, little did the Afghan media try to speculate about the officially awaited results. I found many Afghans critical of the news channels’ lack of interest in collecting and compiling results on their own. “They should have put some effort and informed their viewers,” an annoyed Afghan official told me. Coming from Pakistan, where some TV channels in the race start announcing results even before the polling is over, this was quite some contrast.

Media analysts believe there are two main reasons for the role the Afghan media played: (a) lack of cut-throat competition for financial gains, and (b) foreign funding of the channels. Afghanistan’s economy has made some gains but is still labeled by the United Nations as one of the poorest in the world. The local advertisements’ pie is too small – i.e., only US$20 million, according to estimates. This is too little to feed several dozen news channels hence there were hardly any bruising fight over ratings, which in turn affects the tone of coverage of issues.

“Like other state institutions, the Afghan media has not yet learnt to stand on its own feet. Its economic viability will take time. Some will face the fallout of 2014 withdrawal and only those run professionally will be able to subsist,” Syed Mudassir Ali Shah, the editor of Pajhwok News Agency, told me in Kabul.

International donors are still playing a vital role for these channels to stay operational. BBC Action Media reported in 2012 that although much of it is homegrown, “the independence, energy and character of this media have been substantially enabled by the support of the international community.”

Though many would call it a curse, for me it is better to be clear than ambiguous about someone’s leanings. In Pakistan, news channels swing from one side to another making the viewers confused. But because of the open licensing policy in Afghanistan, anyone who is someone can start a channel. Over the last eight years, many politicians and political groups have set up their own channels.

Uzbek leader Abdul Rashid Dostam is considered a trend setter when he started Ayna TV in 2004 with support from the Turkish government. Three years later Atta Mohammed Noor, the most powerful political ﬁgure in Balkh province, set up Arzu TV and radio, which broadcasts from Mazar-e-Sharif. Some erstwhile Mujahideen leaders too jumped on the bandwagon by establishing channels. Former President Burhanuddin Rabbani, the head of the Jamiat-e-Islami, assassinated in 2011, set up Noor TV. So, in Afghanistan’s case, viewers know if they wish to see a particular politician’s viewpoint they can switch to his channel.

Political parties get a sidekick too. “They can’t get direct foreign funding, but through channels they can get as much as they want,” said an Afghan official requesting anonymity.

During my weeklong stay in Afghan capital Kabul for coverage of elections I observed that most of the Afghan journalists are not only young but well trained too. After 2001, many European media organizations helped train them. “They have been trained not to pay attention to sensationalism. For them democracy is a romance – a new affair. They wholeheartedly push for its progress,” Syed Mudassir Ali Shah says.

Regional Studies Centre of Afghanistan’s director Abdul Ghafoor Liwal, doesn’t shy away from admitting some shortcomings. “The Afghan media has several issues. Most of the journalists are amateurs, some sections of the media are not non-partisan, they are faced with financial woes….…but still its role is crucial for Afghanistan’s future.”

The official radio and television of Afghanistan is more like state-managed Pakistan Television (PTV) as far as broadcasts are concerned. The staple diet is mostly official news and views. The entrance carries pictures of slain Northern Alliance leader Ahmed Shah Masud.

Afghanistan is not much diverse from Pakistan when it comes to threats, intimidation and killings. The death of AP photographer Anja Neidringhaus and injuries to her colleague reporter Kathy Ganon on the eve of the Afghan elections are the kind of sacrifices journalists both local and international have paid to tell a story that needs to be told.

The author is Editor BBC Pakistan. He covered the Afghan presidential elections this year. He may be reached @The HaroonRashid

An Afghan woman shows her inked finger, proof that she has voted, at polling station in the northwestern city of Herat, Afghanistan.