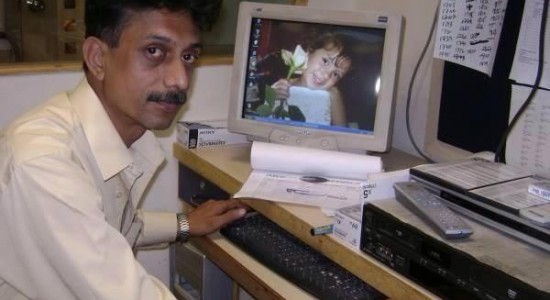 He received a bullet near his neck, the deceased’s colleagues told FN regular blogger Mazhar Abbas.

“He was shot dead in wee hours of Wednesday (January 1),” the TV journalist’s colleagues at the hospital were quoted as saying.

Previously, he had also worked for ARY News channel.

“Shan Dahar received the bullet as he was on his way to village from Larkana district in early hours of Wednesday,” local journalist Babu Iqbal, a senior correspondent for ARY NEWS, confirmed to Mazhar Abbas by phone. “Yes, it is true … but there are still conflicting reports about the motives,” Babu Iqbal went on to add.

Doctor said the bullet was not fatal but because the journalist was brought to the hospital not on time and he died due to “loss of too much blood.”

A local account said that a stray bullet hit the journalist when local residents were firing in air to celebrate the New Year. However, Mazhar Abbas, who monitors such cases of journalists’ killing, believed this account would need investigation.

“I still have my doubts about the ‘accidental theory’ for simple reason that the incident took place some 40 kilometer from Larkana city and that too in the early hours in an area where people normally don’t celebrate New Year,” Mazhar Abbas, who served Pakistan Federal Union of Journalists, argued.

He called upon Abb Takk channel to team must trace witnesses to prove the journalist was not targeted deliberately for his profession. “If he had been killed because there was a lot of firing on the New Year night, (then) there must also be lot of witnesses, who must have seen him in a pool of blood.”

Karachi-based Sindh TV journalist Mushtaq Sarki told FN that Shan Dahar could have survived had the doctors removed the bullet immediately. “A bullet hit him in neck from back side and he was lying unattended at a hospital of Larkana where senior doctors arrived quite late,” he said.

“Shan had worked with me and he was a professional journalist,” Mushtaq said, adding that initial information was not linking his death to his profession. “It more appears accident than anything like target-killing,” the Karachi-based Sindhi journalist held the opinion.

Seven journalists were killed in Pakistan in line of duty in 2013.