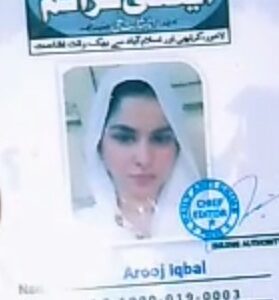 The following are month-wise details of these documented threats targeted against journalists:

ABDUCTION: A social media activist went “missing” after he was returning from Bahria Town near Islamabad and his abandoned car was spotted on Islamabad Expressway later, family and police said. Suleman Farooq Chaudhry was picked by unknown people chasing him in two cars on 4 October 2019, as per details obtained from the family. No group nor any government agency claimed to have taken him into custody. His disappearance was tweeted by Amnesty International’s South Asia researcher Rabia Mehmood. The missing social media activist is said “very vocal” and was “critical” of ruling party. However, his posts on Facebook page were not critical of security establishment. His family said Suleman did not have any political affiliation. He is an engineer by profession and Islamabad High Court on 31 October 2019 sought report from Commission of Inquiry on Enforced Disappearances after the missing engineer’s father filed an application.

VERBAL THREATS: Freelance journalist Mujahid Shah was stopped near Pakistan Secretariat in Karachi on 03 October 2019 where some persons identifying themselves as “Special Branch” personnel to ask him some questions. The journalist told Freedom Network he was receiving “threats” on his social media page. “It is the second time that I am warned of physical attack. The threats were hurled by state actors,” the freelance journalist said.

On 14 October 2019, Ali Raza Rind, president of Dalbandin Press Club, received verbal threats from district police officer (DPO) in Chaghi district of Balochistan after he filed statement of family which alleged Chaghi Police tortured its member. The DPO put the journalist in 4th Schedule of Police Record. With such marking police see you as “anti-state” person and the accused is put under surveillance. In the past, the journalist faced similar situation. However, his name was removed the 4th Schedule List after Freedom Network took up his case.

Allah Ditta Goshal, correspondent of ARY News channel in Muhammad Pur town in Rajanpur district of Punjab province, received “death threats” from owner of brick kiln after he made video of under-construction brick kiln on 04 October 2019. The owner snatched his camera at gunpoint. The journalist called Police Emergency Service. Before the police could reach the brick kiln owner fled the scene. First Information Report was lodged against the accused who is still at large.

ASSAULTS: A group of cops led by a deputy superintendent of police was seen attacking armless 24 News channel reporter Buksh Ali Phulpoto in Sukkur district of Sindh province on 21 October 2019. The incident happened on the day when an accountability court was hearing corruption case against opposition leader Khurshid Shah of Pakistan People’s Party. The attack was recorded and went viral after uploaded to Freedom Network’s Facebook and Twitter pages. Instead action against the cops, senior police officers ordered case against the journalist. However, strong reaction on social media, triggered by the video, forced the senior officers to drop the idea of FIR against the journalist. The issue was “resolved” after the deputy superintendent of police visited the journalist in Sukkur Press Club with sweets and apology.

ARY News crew – reporter Salahuddin, cameraman Hanif and DSNG operator Faizan-  was attacked by security staff of Lucky Cement seizing equipment of the crew as well on 18 October 2019. The equiopment included cameras and mobile phones of the crew. The equipment was, however, returned after negotiations with the Lucky Cement management, according to the crew.

Khabrian reporter Hasnain Akhlaq was threatened of “dire consequences” by Jamiat Ulema-e-Islam (Fazlur Rehman) workers in Lahore on 30 October 2019. The journalist was attacked when he was covering the protest demonstration of the opposition party. “The journalist was rescued by other party members and he left the place without coverage,” his colleagues told Freedom Network.

OFFLINE HARASSMENT: A TV journalist in Charsadda district of Khyber Pakhtunkhwa province faced harassment after he filed report on triple murder case for his 92 News channel on 07 October 2019. As the report went on-air, Charsadda district police officer allegedly called the reporter expressing displeasure over his report. “My life is made miserable as the district police officer is calling me to his office torturing me mentally,” Basit Khan said in his open letter posted on his Facebook page on 10 October 2019 threatening self-immolation if the police officer continued his harassment. A delegation of Khyber Union of Journalists visited the journalist to persuade him to drop self-immolation threat. Mr Khan dropped the idea and decided to face the challenge.

On 13 October 2019, a tribal police officer who was accused by shopkeepers in Landikotal town in Khyber district of Khyber Pakhtunkhwa province raided Landikotal Press Club to look for Pakistan Television correspondent Hazrat Umar for posting video of shopkeepers making the allegation against the officer on his Facebook page. The senior management of the press club took up the issue with senior police officer who suspended the officer. The officer, meanwhile, continued to warned Umar against “not settling issue” with him.

Khalil Jibran, a tribal journalist in Landikotal town in Khyber district of Khyber Pakhtunkhwa province, is facing harassment from state actors for last several months. He was detained by the paramilitary Frontier Corps personnel for several days torturing him before he was freed after Freedom Network took up his case through advocacy campaign. “I am followed and chased by the personnel of security establishment,” he told Landikotal Press Club management. “I am receiving calls with strange questions from the callers. “Whenever I report about Torkham border crossing I receive more calls with callers threatening me. These calls are mental tortures. I cannot focus on my professional work because of mental stress.”

KILLED: Young woman journalist Arooj Iqbal shot dead by her former husband who owns the paper, in her home in Lahore on 24 November 2019.

Arooj, 27, was divorced 30 September 2019 after he “court marriage” with Dilawar Ali on 6 April 2019 , her brother Yasir Iqbal told Freedom Network. “As she was entering her home in Qila Gujjar Singh in Lahore Dilawar came and opened fire at her. She received bullet wound in her head and died on the spot,” the brother shared details of the gruesome attack.

“The former husband wanted her to drop idea of launching own newspaper ,” the brother said, adding that late Arooj was planning to launch her newspaper called “Franchise.”

Mr Ali runs own newspaper “Anti-Crimes where Arooj first got job and then her married her.

Yasir lodged First Information Report on 25 November 2019 in Qila Gujjar Sindh Police Station charging Dilawar Ali for murdering his sister. He stated in the FIR that Dilawar was using violence against his wife and a rapprochement was made between the couple through the family members. However, Dilawar was “threatening” her of dire consequences.

The accused secured interim bail from a local court where he is seeking confirmation of his bail.

INJURED: Zulfiqar Ali Khaskheli, working for Sindh TV channel and president of Nawabshah Press Club, Nawabshah in Sindh province, was attacked on 25 November 2019 when he was going home. The attack resulted into injuries to the journalist who was taken to hospital for wounds’ treatment. The journalist’s condition is stated stable. Police registered case against some persons who secured pre-arrest bail.

WRITTEN THREATS: On 23 November 2019, Rawalpindi-Islamabad Union of Journalists Secretary-General Asif Bhatti received written threats to his life after his articles on ‘Azadi March” of opposition Jamiat Ulema-e-Islam (Fazlur Rehman) in November 2019. The journalist, who works for Geo News TV channel in its Islamabad bureau informed Freedom Network about the issue.

“I received obnoxious calls from Afghanistan cell numbers giving me and my family life threats for what I wrote in my newspaper,” the journalist told Freedom Network. The journalist lodged First Information Report stating that the callers told him “we know your home and family members and school where they study.” Asif said these calls and threatening messages “worried my family and they are quite upset and mentally stressed.”

“If you do not stop and no rebuttal comes from your side about what you wrote against our party and its leaders you will face severe consequences,” the journalist was warned as he shared some messages with Freedom Network he received from Afghanistan-based cell phone numbers.

Abdul Azam Shinwari, who works for Associated Press of Pakistan and Hum News TV channel from Landikotal town in Khyber district of Khyber Pakhtunkhwa province, received threatening messages on his mobile after he did stories on “rampant corruption” in police and out-of-turn promotions of certain tribal police personnel leaving deserving cops out.

The matter was brought into notice of senior police officers who ordered action against officer for “threatening” the journalist. The same officer in question was earlier involved in raid on Landikotal Press Club in Landikotal town.

CENSORSHIP: Oganizers of ‘Azadi March’ by Jamiat Ulema-e-Islam (Fazlur Rehman) banned entry of female journalists for coverage of protest it was holding against the federal government in Islamabad. The sit-in continued for several weeks. However, the women journalists, including Annie, Shiffa Yousafzai, Hani Sherazi, Quratul Ain of Hum News TV channel, Amber Shami of Samaa News, Shazia Nayar of GNN News and anchor Gharida Farooqi, were disallowed to enter the protest venue on 1st November 2019.

“A man approached us to tell that we are not allowed as we are women,” said these journalists. “In a minute’s time a crowd of men encircled us and started chanting slogans asking to leave the venue.” However, when the issue was viral the top party leadership allowed the women journalists conditionally. The women journalists were asked to “dress up properly.”

Pakistan Electronic Media Regulatory Authority “advised” Express News channel to avoid “derogatory” and “disrespectful” comments in “To The Point” talk-show programme. It also asked all TV channels to follow the Lahore High Court order regarding ban on coverage of protests held at The Mall.

Of the 10 journalists faced the documented threats included nine from TV and one from print media.