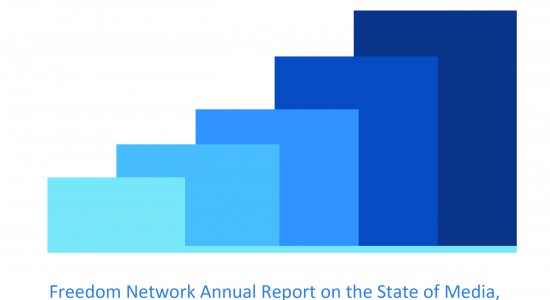 ISLAMABAD: If the year 2014 was the most murderous year in Pakistan’s history with 14 journalists and media assistants killed that year, the year 2015 has proved to be the year that saw a dramatic rise in censorship with both journalists and media houses facing a silent but potent crackdown on dissent and freedom of expression not seen before under civilian rule, reveals annual report by Freedom Network, an independent Pakistani media and civil liberties watchdog.

“From gag orders issued by the media sector regulator against TV channels to ban clamped under court orders on coverage of politicians on media to repeated government warnings to media for commenting on foreign relations, the year 2015 proved to be the year of censorship for media in Pakistan,” said Freedom Network in its annual state of the media report released here Monday, February 01, 2016.

The report titled, “Growing Sounds of Silence – The Year of Censorship,” expresses concern at what it termed is a growing trend to browbeat the media into relative silence on issues that require raising of controversial questions for their resolution.

The report said that there may have been statistically fewer murders of journalists, media assistants and activists in 2015 in Pakistan – seven – than in 2014, the climate in which they operated grew ominous with growing ease by state and non-state actors on how media did its traditional job of being the guardians of public interest.

The year 2015 was significant in terms of fighting impunity of crimes against media and its practitioners. Sindh Rangers announced arrest of Faisal ‘Mota’ – convicted in murder case of Geo News reporter Wali Khan Babar. The Sindh government also made public the arrest of mastermind of murder of media activist and human rights defender Sabeen Mahmud. Balochistan government also recorded some progress to fight back the impunity under former chief minister Dr Abdul Malik leadership releasing findings of judicial commission into killing of journalists and also arresting alleged killers of journalists Irshad Mastoi and Abdur Rasool and media assistant Muhammad Younas.

Balochistan, Khyber Pakhtunkhwa, Punjab and Sindh provinces witnessed attacks on journalists, media assistants and media activist in 2015. All the four provinces had witnessed similar situation journalists faced while North and South Waziristan continue to be ‘no-go’ areas for journalists unless embedded with the military or militants.

Pakistan returned to the notorious practice of ‘press advise’ in 2015 with regulatory authorities for both print and electronic – Pakistan Electronic Media Regulatory Authority (PEMRA) and Press Council of Pakistan (PCP) – regularly ‘advising’ the free press to avoid criticism of Saudi Arabia for its war with Yemen or Haj stampede.

Dera Bugti-based journalist Manzoor Ahmed Bugti continues his ordeal since he went missing on November 7, 2014 from Quetta, provincial capital of Balochistan province. His family avoids taking up the missing journalist case as it was ‘told’ he would ‘soon return home.’ It didn’t happen in 2015. Maybe 2016 will be different in this case.

The Freedom Network report includes analysis by several well-known media and civil rights activists including Haroon Rashid on the unusual response mechanism being adopted by journalists in Pakistan stemming from an environment of insecurity; Kamal Siddiqi on the travails of being an editor in a time of grave risks to media sector in country; Iqbal Khattak on how the state is abdicating its duty in combating impunity; Afia Salam on the hostile impact of a growing climate of fear and intimidation; Nighat Dad on the burgeoning trends of surveillance and privacy violations; Faizullah Jan on growing censorship on campus and threats to the free market place of ideas; and Muhammad Aftab Alam on the crumbling state of freedom of expression in the country.