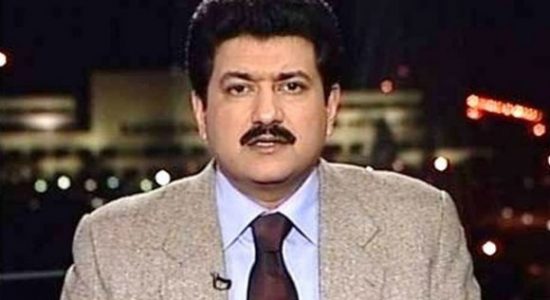 National Press Club in Islamabad was witnessing hectic activity on 6 April. A senior journalist, who himself survived a life attempt, was there to give away financial support from his own money to families of slain newsmen.

A big name in Pakistani journalism, Hamid Mir, was making the distributions from an award he won as “Most Resilient Journalist” from Free Press Unlimited in the Netherlands in 2016. He said this was a small gesture to emphasize that families of fallen heroes needed all the assistance.

Around an oval-shaped reading table in the NPC library, Hamid Mir, was signing cheques for the selected bereaved families.

Thirteen days later the third anniversary of attack on Hamid Mir – 19 April 2014 – arrives and perhaps may pass without any significant commemoration. He survived the assassination attempt in Karachi with two bullets still inside his body to remind him that practicing journalism in Pakistan is not an easy job, though he considers it “a passion” than a profession.

Hamid Mir may not like this blog as he is avoiding self-projection. So are some of his fans who reacted angrily to tweets about his assistance. Never in history of this country a journalist used own money to assist fellows in this way. For journalists and media rights activists this was no ordinary April 6 day. I took the risk of annoying Hamid Mir by tweeting his kind gesture by sharing his images.

TV anchor Javed Chaudhry looked inspired by what his fellow colleague had done moments before announcing to dedicate “one per cent” of his salary to the Endowment Fund at the National Press Club set up to help journalists and their families. It was indeed another laudable announcement.

Ideally, Hamid Mir should have arranged the programme of giving away assistance on 19 April, coinciding with attack on him that day in Karachi. As I know, he does not like self-projection and he stopped me from making the assistance pledge public on many occasions.

No movement or advocacy can work without heroes. Perpetrators of crimes against Hamid Mir thought he would no longer take side in the name of public interest and will be doing “subdued journalism” after the attack. But Hamid Mir emerged even stronger from the attack becoming more vocal and a strong preacher of journalists’ safety and press freedom.

We need journalists like him to keep the struggle for journalists’ safety and press freedom going in Pakistan, where threat actors are changing tactics to threaten independent and investigative journalists.

Journalists standing up against elements unwilling to allow press freedom need support from their organizations and employers. In case of attack on Hamid Mir, his employer supported him when pressure was immense to throw him out. Hamid Mir was made “some offers” to join competitive rival TV channels when Geo Network was under bombardment – suffering huge financial losses to pay hundreds of staff on time. Both made wise decisions and both emerged stronger.

The government of Prime Minister Nawaz Sharif had set up a three-member judicial commission to investigate the attack on Hamid Mir. Three years completed and the commission’s findings have not been made public although a leaked report of the judicial commission findings seems to have not been different from previous judicial investigation to pin blame on individuals, organizations or groups responsible for these crimes against journalist and media.

We cannot avoid 19 April-like attacks in future if lessons are not learnt and safeguards enacted. The key lesson is that media organisations should stand up for their journalists. Hamid Mir and Cyril Almedia cases are good examples. Journalists’ representative bodies and professional editors have equal responsibility to support journalists, who face ire because of their work. Unfortunately, both have not stood behind their colleagues when their support was warranted in both Hamid Mir and Cyril Almedia cases.

In post-airwaves liberalization in Pakistan, TV anchors – some of them happen to be known professionals – are stronger than editors or working journalists. They remain divided when crisis-like situation journalists’ safety and press freedom arises. The division in their ranks prove beneficial for predators of press freedom.

Commercial interests, competitive market dynamics and increasing security establishment’s control made things worse for both issues – journalists’ safety and press freedom – when owners took role of editor and news director to lash out at rival competitor while the security establishment was the greater beneficiary out of this situation. In both Hamid Mir and Cyril Almedia cases, media owners’ role was damaging. And this damage continues to weaken journalists’ safety and press freedom.

The author is journalists’ safety expert.