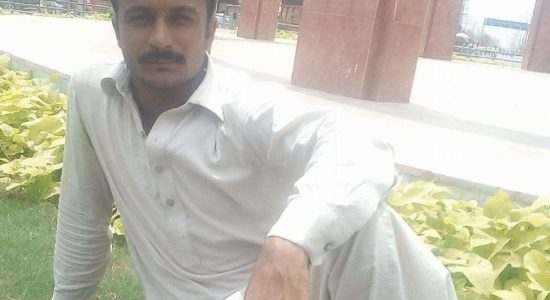 Murder:  Young journalist Abid Hussain, worked for Sangemail newspaper, based in Multan, in Dewan Sahib town in Borewala tehsil of Vehari district in Punjab province succumbed to injuries a day after he was attacked on August 22, 2018, read the First Information Report (FIR). His father said Hussain was killed for his reporting on “criminal activities” in the area.

He is the third journalist murdered in 2018 after sub-editor Anjum Muneer Raja was killed in Rawalpindi district near Islamabad on March 1 and journalist Zeeshan Ashraf Butt in Sialkot on March 27. All three murdered journalists hailed from Punjab province.

“They (attackers) attacked him with sota (sticks) on different body parts, including head. The attackers warned others they would face the same fate if they came forward (to rescue the journalist),” according to the FIR. Hussain succumbed to his wounds in Nishtar Hospital in Multan district on August 23 at 11.30pm, according to the FIR.

ASSAULT: Farid Sabri, reporter of Hum News channel, was attacked at the entry gate of Islamabad High Court by police on August 13 even he showed his accreditation card. The journalist went there to cover legal case of jailed former prime minister Nawaz Sharif. “I was slapped on my face when I asked why I am not allowed to enter the court premises while having prior permission,” the reporter told Freedom Network.

ATTACK ON HOME: Unknown men came to fire shots outside residence of Express News channel anchor Imran Khan on the night of August 1 in Lahore. The family, including the anchor hosting political talk-show, remained safe. Imran believed the firing could have been “a message” for him to not speak on sensitive issues. The journalist was not able to say who might have been behind the firing.

CENSORSHIP: On August 13, Islamabad administration did not allow media to cover jailed leader of Pakistan Muslim League (N) leader Nawaz Sharif’s appearance before the accountability court in Islamabad. “No-one was allowed to enter the court premises,” more than a dozen TV and print media journalists told Freedom Network. The administration cited “security reasons” to block the reporters and crewmembers’ entry. They staged protest outside the court premises to vent anger at the administration’s decision.

ONLINE HARASSMENT: Journalist Saleem Safi who hosts “Jirga” show on Geo News channel, has been harassed online trolls supporting ruling Pakistan Tehreek-e-Insaf party of Prime Minister Imran Khan after he disclosed on August 19 that former prime minister Nawaz Sharif had paid from “own pocket” expenses at the PM House. His disclosure came after the PTI government said it would launch “austerity campaign” to lower expenses and make savings.

HARASSMENT: Senior Geo News channel’s correspondent Asif Ali Bhatti denied entry into the National Assembly despite having official permission to carry out professional duty. DSP Security Parliament House refused him entry on August 13. Sargent of Arms of the Parliament also misbehaved with Siddique Sajid, president of Parliament Reporters Association, Kashif Rafique of NewsOne TV channel and reporter Asghar Chaudhry of Jehan Pakistan newspaper on August 13. Federal Minister for Railways Sheikh Rashid damaged mobile phone of Channel 24 TV cameraman Aqib Javed on August 21 when he filming the minister allegedly attempting to push a woman away in Rawalpindi. “The minister grabbed my mobile and smashed to the concrete ground damaging the mobile I am using to make videos for my channel,” the cameraman said. Federal Information Minister Fawad Chaudhry promised to talk to Sheikh Rashid over the issue. On August 15, journalist Abdul Waheed asked Pakistan Muslim League (N) president Shahbaz Sharif a question about Sharif family political matter. The question angered the PML-N supporters and they hinted at attacking the journalist, who, however, remained safe but harassed. No party leader moved to cool the situation down.

Pakistan Federal Union of Journalists took serious note of these cases of harassment of journalists as “sanctions” on press freedom.

LEGAL CASE: The Supreme Court served August 29 a show-cause notice to ARY News host Arshad Sharif for discussing sub judice matters in his talk show “Powerplay.” Police booked Geo News channel’s reporter Ahmed Faraz in Lahore on August 8 after abusive language was exchanged to react to video made of the traffic cop while humiliating a motorcyclist. A video of scuffle between the cops and the reporter and his crewmembers went viral. The police included anti-terrorism clause in the FIR against the journalist.

ROBBERIES: Adil Gill, cameraman of Daily Ausaf, was robbed of his camera near his home in Rawalpindi district near Islamabad on August 27. Unknown bikers intercepted him while he was returning from workplace. The bikers also snatched his mobile phone. On August 30, Aaj TV channel’s cameraman Muzamel Ali Khan was also robbed when unknown robbers snatched his TV camera in Rawalpindi district in Punjab province.

Of these 13 documented cases, in six cases state actors were involved, in one PML-N, online trolls and in four cases unknown actors.