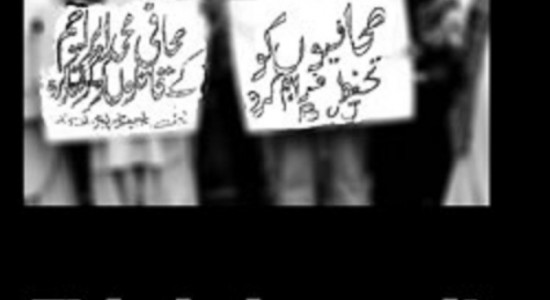 MURDER: Zaffar Abbas, reporter of 7 News TV channel, Malisi town of Vehari district in Punjab province, was found dead a day after he was reported missing on 6 September 2019. Initial reports suggest he was kidnapped by six people, including a woman. Police have arrested some accused. However, details are awaited whether there was any link between Abbas’s murder and his journalism work.

DETAINED: Police in Panu Aqil in Sindh province took away journalist Nadeem Bozdar on 7 September 2019from his office. He works for 24 News TV channel in Panu Aqil. The journalist was then handed over to Kot Sabzwal Police Station in Punjab province. His colleagues said the police arrested him to “teach” him a lesson. Senior journalists in Sukkur district of Sindh province took up his issue with senior police officials who intervened to set the journalist free after two days. He was freed on 9 September 2019.

On 18 September 2019, TV anchor Noor Ul Aarfeen who hosts talk-show on AbbTakk TV channel received “serious threats” from Opposition Leader Khawaja Izharul Hasan of MQM in Sindh Assembly on phone and on WhatsApp. “I am worried for my life after these threats,” he told his colleagues.

VERBAL THREATS: Daily Al Sharq newspaper reporter Ali Abbasi received threats from principal of Government College, Murree, after he published report about the principal who was alleged “occupying” others’ lands. “The principal warned me to publish rebuttal on my own, otherwise, I should get ready for the consequences,” the reporter spoke of “life threat” he received from the principal.

CENSORSHIP: Investigative journalist Rauf Klasra disclosed on 23 September 2019 that his show on Aap News TV channel was closed because he and his co-anchor Amir Mateen “exposed” some “corrupt ministers” in the federal cabinet. “Prime Minister Imran Khan was upset and we were receiving messages and the (TV channel) management was under pressure,” the journalist tweeted the reasons behind closing of the programme.

The Nation newspaper stopped its cartoonist Khalid Hussain from working after his controversial cartoon caricaturing Prime Minister Imran Khan in his cartoon published on 25 September 2019. Khalid Hussain, 54, a professional cartoonist, told RFE/RL’s Gandhara website that the management of the newspaper informed him that they will not be printing his cartoons after a sketch of his depicting Pakistani Prime Minister Imran Khan garnered angry reactions from senior government officials.

LEGAL CASES: Sajid Makol, reporter of 7 News TV channel, had filed a report about Rajanpur district police who have been alleged to have “tortured” some women. The women received injuries.  His TV channel did not air his report but the reporter posted the story on his social media account angering Station House Officer Qaisar Hasnain who “threatened” the reporter with dire consequences.  (The reporter has shared screen shots of this conversation with Freedom Network). The SHO raided a party where, according t the police officer, gambling was taking place. An First Information Report was lodged against the alleged gamblers, including journalist Sajid Makol. The reporter pleaded he was not present on the spot. The journalist claimed on the same day the SHO snatched Rs.1.1 million from him after he sold his Cultus car to get treatment of his ailing mother. The journalist lodged a complaint against the SHO with district police officer of Rajanpur district in Punjab province but there has been no action yet against the concerned police official nor the journalist was excluded from the FIR.

On 18 September 2019, Kacho Keti police station in Kandhkot district in Sindh province registered First Information Report against senior journalist Imdad Phulpoto, working with G TV channel, implicating him in alleged kidnapping case. The police charged four men, including the journalist, for kidnapping a person and releasing him later for Rs1 million. The police have not yet arrested the journalist who came to know about what he called “false FIR” on 28 September 2019. “This FIR is registered on political ground against me,” the journalist pleaded.

Similarly, Panu Aqil Police Station police registered case against journalist Sahil Jogi, working with Samaa News TV channel in Kandhkot district in Sindh province implicating him in a kidnapping case on 28 September 2019. Senior journalists in Sukkur district said the FIR against Sahil was based on “political ground.” The complainant against Sahil is the one who also got FIR registered against another journalist Imdad Phulpoto in Kandhkot.

Eight out of 11 documented cases took place against TV journalists and remaining three against print journalists.