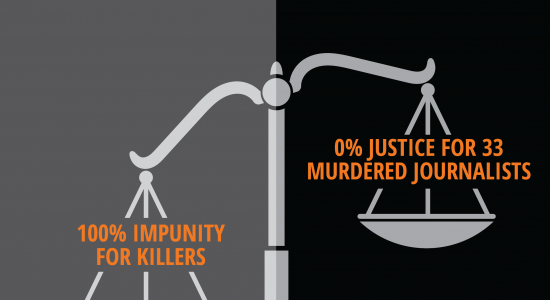 ISLAMABAD (31 October 2019): At least 33 journalists were murdered for their journalism work in Pakistan during the last six years, including seven in the past one year (November 2018 to October 2019) but none of them received justice as the killers of not a single one of these journalists was punished indicating the total impunity from punishment enjoyed by predators of journalists.

This is revealed in a new report issued here by Freedom Network, a Pakistani independent media rights watchdog, tracking impunity of crimes against journalists in Pakistan, on 31 October 2019 to mark the International Day to End Impunity for Crimes against Journalists observed by the United Nations on November 2 every year.

According to the Pakistan Impunity Scorecard, a total of 32 FIRs were registered for the murder of 33 journalists during the period 2013-19, of which police could file challan (charge-sheet) in only 20 cases – or just 60%. Out of 33 cases the courts declared only 20 cases fit for trial (60%) of which the prosecution and trial was completed on only six cases – only 18%. In these six cases, the killer was convicted in just one case but escaped punishment after successfully overturning the conviction at the appeal stage after which the family of the murdered journalist abandoned its pursuit for justice for lack of resources. The net result: justice for 33 murdered journalists – zero per cent!

According to Freedom Network, the impunity enjoyed by the killers of journalists in Pakistan is one of the highest in the world. It said its report is based on a special impunity index developed by it and by examining the FIRs of journalists and interviews with the families, lawyers and former colleagues of the murdered journalists revealing the following startling findings:

Deadly inaction: In three-fourth cases, the local state authorities were pre-informed by journalists of threats they were facing before being murdered. Despite this avalanche of early warning and threat reporting, the authorities failed to prevent their murders.

Incomplete investigation – police failures: According to the family members of journalists murdered, of the 33 journalists murdered in 6 years under review, the police managed to investigate the case sufficiently enough to make the case file move to a court in only 20 cases – or just about 60.6%. In 13 cases, or about 39.4% – the police failed to generate a final challan – or a full investigation report – to submit before a court for trial. In Punjab, the police completed the challan in 7 of its 9 cases (or 77.7%), in Sindh in 6 of 7 (or 85.7%), in Sindh 4 of 5 (or 80%) and in KP 2 of 10 (or 20%).

Zero punishment – justice failures: The level of impunity enjoyed by killers of journalists in Pakistan is almost complete. The killer of only one of the 33 journalists murdered in the period 2013-19 was convicted (3.5%). The only case of conviction of an accused killer was at the district court level in KP after which he successfully challenged the verdict and managed to get his conviction overturned at the high court level.

The Impunity Report 2019 makes four recommendations to successfully combat impunity of crimes against journalists in Pakistan, including (i) Enactment of special federal and provincial laws for safety of journalists to obligate the legal system to protect journalists; (ii) Appointing special federal and provincial prosecutors on safety of journalists to improve prosecution of cases; (iii) Enacting safety policies and protocols and annual safety audits in-house at media houses aimed at pre-empting and preventing risks and threats to their journalists and other staff and to pool resources for prosecution of crimes against journalists; and (iv) Decriminalizing dissent in the Prevention of Electronic Crimes Act (PECA) law, including abolishing Section 11 (dealing with hate speech) and Section 20 (dealing with defamation) and Clause 37 (dealing with prerogative of Pakistan Telecommunications Authority to arbitrarily block websites) while vagueness around the phrases included in Section 9 (dealing with glorification of an offense) and Section 10 (dealing with cybercrimes) should also be removed to prevent journalists from being targeted for journalism.