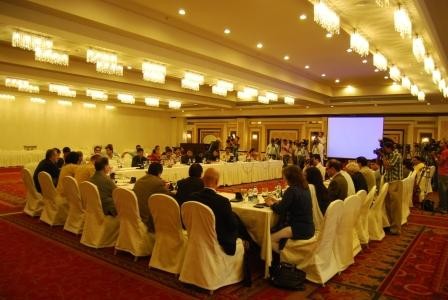 The Steering Committee of Pakistan’s National Coalition on Media Safety (NCOMS) endorsed on 8 October 2013 the UN Plan of Action on the Safety of Journalists and Issue of Impunity and issued a comprehensive ‘Islamabad Declaration’ outlining a set of action items and recommendations for key stakeholders on combating impunity against journalists in the country.

The Islamabad Declaration covers three main categories of stakeholders and their proposed action items – media sector actors; state institutions and political parties, and civil society. It suggests ways and means the stakeholders will need to collaborate to fight the impunity of crimes against journalists and media in Pakistan where six journalists have so far been killed in 2013 alone and over 60 in the last 6 years.

Pakistan has been selected by the UN as one of the five pilot countries where the UN Plan of Action on the Safety of Journalists and Issue of Impunity will be implemented to stem the killing of journalists. The other pilot countries include Nepal, Iraq, South Sudan and Mexico.

“A democratic country cannot be pluralistic and progressive if its media remains a target. The newly elected government believes that for development to be sustainable and for institutions to strengthen and consolidate themselves, freedom of expression and right to information need to be protected,” Minister Pervaiz Rasheed addressed the first meeting of the Steering Committee.

Words of support for the UN Plan of Action from the federal government minister were also echoed during his speech. “The [Pakistan] Government supports the efforts of United Nations and its partners in Pakistan to combat impunity against journalists to keep them safe, particularly the implementation of the UN Action Plan on Impunity against Journalists,” the minister said.

“The Government of Pakistan will extend support for the implementation of the UN Action Plan with the help of the National Coalition on Media Safety. We are happy to note that this wide-based coalition includes representative associations of the stakeholders of media as well as national media support organizations who are joining hands to ensure safe working environments for journalists in Pakistan.”

Minister Rasheed also assured the Steering Committee of NCOMS that in light of the National Coalition on Media Safety’s consensus on assistance from the Government of Pakistan in facilitating a safer environment for journalists, we will consider its recommendations including supporting a bill on media safety in Parliament and appointing a special prosecutor to investigate attacks against journalists. “We hope that the media sector will also quickly come up with a voluntary charter on safety of journalists including protocols, mechanisms and tools that will be endorsed by all media stakeholders and adopted and implemented at media houses.”

UNESCO Pakistan Director Kozue Kay Nagata opened the meeting reiterating her organization’s support for the collaborative efforts by all the stakeholders to fight impunity in Pakistan. “In past few years, the situation for practicing journalism in Pakistan has increasingly become alarming. This has seriously affected journalists’ ability to exercise freedom of expression,” she remarked.  “[The] Committee to Protect Journalist [CPJ], has ranked Pakistan as the world’s third deadliest nation for the press in 2013 after Syria and Egypt and the safety of journalists and the struggle against impunity shielding their killers are essential to preserve the fundamental right to freedom of expression, guaranteed by Article 19 of the Universal Declaration of Human Rights.”

Below is the text of Islamabad Declaration:

A view of inaugural meeting of steering committee of national coalition on media safety in Islamabad on 8 October  2013.