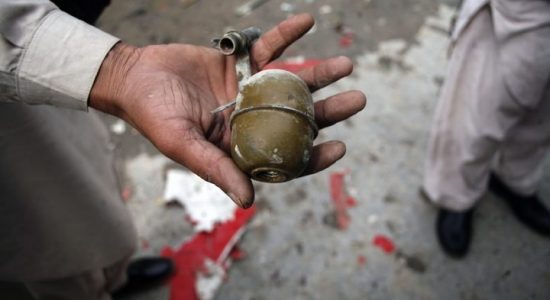 A digital journalist escaped attempt of murder in Balochistan and a mob attacked head offices of Jang newspaper and Geo News channel in seven other cases of threats journalists faced across Pakistan during February 2021, monitored and documented by Pakistan Press Club Safety Hubs Network programme, an award-winning civil liberty organization Freedom Network is managing since early 2016.

Khyber Pakhtunkhwa has recoded no threat journalists faced during the last month, however.

ATTEMPT TO KILL: Naseeb Zehri, who runs a digital media platform “Kalat Voices” in Kalat district of Balochistan had grenade attack on his home on 19 February 2021 wounding the digital journalist. Zehri is also an employee of government Social Welfare Department, was being treated for his wounds in a local hospital till the filing of this report.

A Baloch separatist ground outlawed “Balochistan Liberation Army” claimed responsibility for the attack on the digital journalist. The group accused him “of orchestrating government propaganda” against the group. No arrest is made so far.

Journalists are under attack from both sides as neither the government nor the separatist groups allow independent and professional journalism in Balochistan, which is experiencing violence for last many years and self-censorship among journalists has increased to stay safe. As mainstream media is not reporting the province more citizens are taking up social media platforms to stay informed as such platforms are increasing to plug the gap.

INJURED: Bol News channel’s cameraman Muhammad Rehan was injured while covering by-polls in Malik area of Karachi on 16 February 2021. He was injured as rival parties’ supporters clashed on polling day. The journalist was treated for face wounds later in a hospital and his condition was out of danger. Local police refused to register a case against the parties’ supporters as Karachi Press Club and representative bodies condemned the incident.

ATTACK ON MEDIA HOUSE: A mob attacked head offices of Jang newspaper and Geo News channel in Karachi 21 February 2021 damaging walk-through gate and windows while harassing staff inside their offices. TV footage showed broken windowpanes near the reception area of the building on Chundrigar Road. The mob was protesting some remarks in a Geo News show. However, the protest was not peaceful as public property was damaged and journalists inside the building were harasses. Police took time to arrive and protect the media house from further attack from the mob. However, they arrived to arrest 13 protestors to charge them with anti-terrorism law.

ARREST: Federal Investigation Agency arrested 23 February Nawai-Waqt newspaper reporter Abdul Jabbar Umrani outside Quetta Press Club under controversial PECA law. The journalist, according to FIA, was arrested after a government official lodged complaint against him under the PECA law after the journalist uploaded some content to his Facebook page.

OFFLINE HARASSMENT: City 42 TV channel reporter Zain Madni Hussaini was harassed by Punjab Police official in Lahore on 11 February 2021 while reporting on public complaints against the local administration while an event was taking place about Pakistan Super League’s sixth edition launch. “I highlighted the citizens’ pains and agony. While I was doing my professional duty a deputy superintendent of police Umar Baloch snatched my camera and threatened of dire consequences,” the journalist told Freedom Network.  The issue of the journalist’s harassment was taken up at higher level but no action was taken yet against the official.

ASSAULT: ARY News channel’s cameraman Jahangir Baloch was attacked by protesting lawyers who were angered by Capital Development Authority demolishing chambers in G8 Markaz in Islamabad on 8 February 2021. Baloch was covering the lawyers attacking the Islamabad High Court and later harassed its Chief Justice Athar Minallah. While a case of attack on chief justice office was registered the attack on journalist was also mentioned in the same police report.

ATTACK ON HOME: Sukkur police raided residence of Samaa TV bureau chief Sahil Jogi on 21 February. The house was raided in presence of police contingent in Mirzapur village near Shikarpur. The journalist said he and wife were “tortured.” The police snatched his mobile. However, locals frustrated the police by resisting the journalist arrest. When the issue was taken up with senior police command, who said the police was searching for Rahid jogi and raid on journalist’s residence was case of “mistaken identity.” Journalists, lawyers, civil society organizations took out a protest rally the next day and called the raid as “harassment.”

VERBAL THREATS: Kohi-e-Noor TV reporters Muhammad Faisal and Malik Junair were given 23 February 2021 verbal threats on the phone after they filed report about a girl kidnapping case. The two reporters alerted their regional bureau chief Iftikhar Bhatti that Pakistan Tehreek-e-Insaf social media activist akia Safdar Abbasi threatened them after the report was aired. The bureau chief took up the issue with journalist representative bodies and the lady herself who even threatened Mr Bhatti.