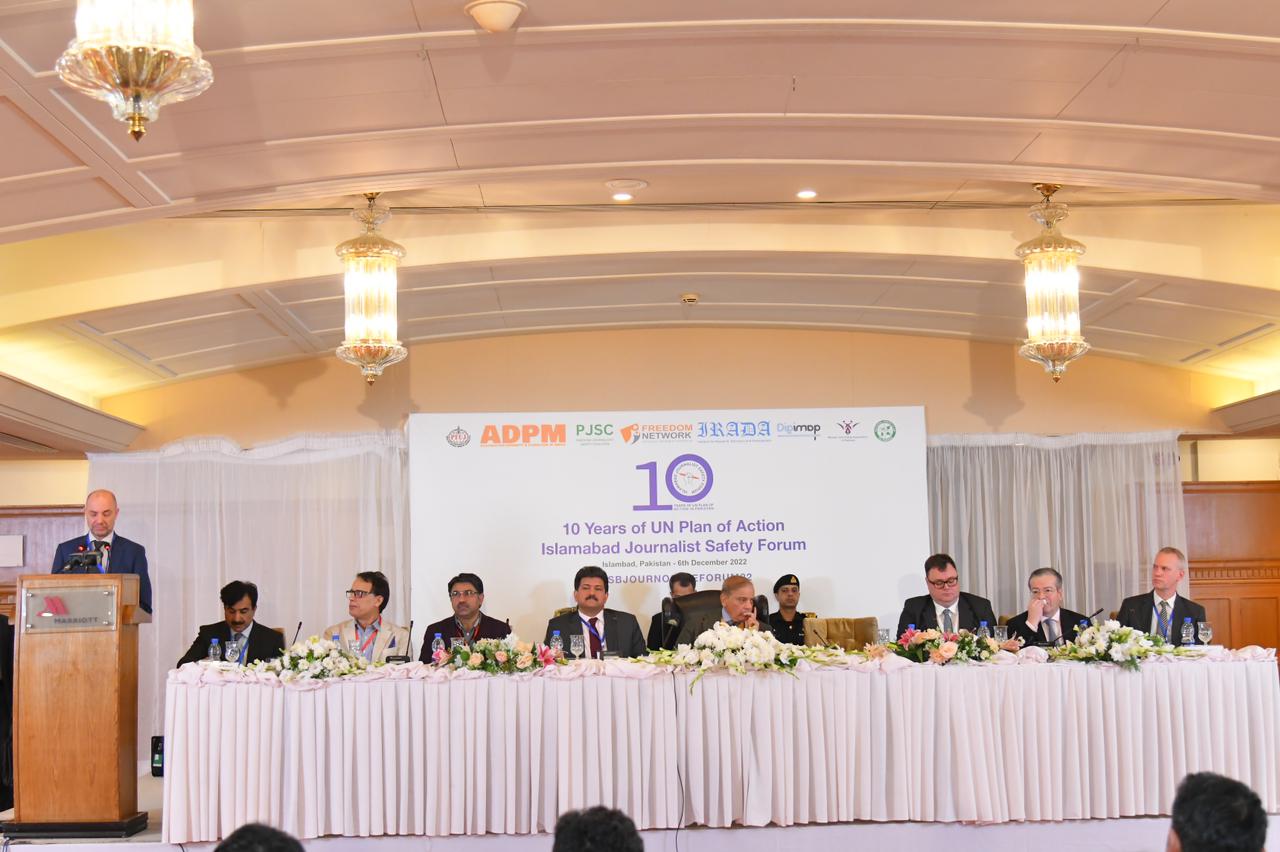 ISLAMABAD (13 December 2022) – Independent media watchdog organisation Freedom Network and multi-stakeholders advocacy entity the Pakistan Journalists’ Safety Coalition (PJSC) organised the Islamabad Journalist Safety Forum on 6 December 2022 in Islamabad to mark the 10-year anniversary of the UN Plan of Action on the Safety of Journalists and the Issue of Impunity.

Prime Minister of Pakistan Shehbaz Sharif delivered the keynote address at the event.
PM Shehbaz Sharif said that his government was committed to ensuring the safety of journalists and would work for the effective implementation of the federal law for the protection of journalists.
“Sustainable engagement and collaboration among the State, media, civil society, parliament and the UN and other international bodies is the only way to combat impunity of crimes against journalists everywhere in the world, including Pakistan,” Mr. Sharif said. “My government would like to be part of efforts of all relevant stakeholders in making Pakistani democracy stronger through free media and safer journalists.”
The Prime Minister said he would proactively take up the matter of the lack of implementation of the federal journalists’ safety law and “complete the steps” necessary to set up the safety commission envisioned under the law for investigation and prosecution.
He said he would also “certainly look into” the controversial Section 6 of the federal law, which requires journalists to meet a good-faith
condition to receive protection, and see how it can be overcome in consultation with journalists.
Earlier, the PJSC Chairperson Hamid Mir had welcomed the national and international participants to the event. Mr. Mir said murderers were convicted in only two out of 53 cases of Pakistani journalists killed between 2012 and 2022, indicating widespread impunity for perpetrators of attacks on journalists. He demanded that justice must be served in the cases of all these journalists.
Lars Bestle, the Regional Director for Asia at IMS (International Media Support), said all stakeholders in Pakistan have done well in terms of the collaborative spirit promoted by the UN Plan of Action so much so that Pakistan has become the first country in Asia to specifically legislate on the safety of journalists.
“This result has been possible due to the popular consensus in Pakistan that safety of journalists is not just a matter for the media but is integral to the very mission of democracy,” Mr. Bestle said.
The Ambassador of Denmark, Norway, and France addressed the gathering and appreciated Pakistan’s recent legal framework for the protection of journalists while stressing the need for enforcement of the safety laws.
The Ambassador of Denmark to Pakistan Jakob Linulf said Denmark sees Pakistan with great potential for social development and economic progress.
“This potential will be nurtured through continued attention to media freedom and inclusion of plural voices, views, and perspectives,” he said. “This will increase demand for sustainable development and citizens inclusion in policy making.”
The Ambassador of Norway to Pakistan Per Albert Ilsaas said he admired the talented, resourceful, and fearless Pakistani journalists. He said true democracy requires freedom of expression.
“Pakistan has taken important initial steps with the passage of the law on protection of journalists,” he said. “Of course, legislation is not enough, and enforcement is also required.”
The Ambassador of France to Pakistan Nicolas Galey said the threats to press freedom put the reliable access to information for everyone at stake.
“We welcome the adoption of the Act (for journalists’ protection),” he said. “It is a major step forward, but the challenge is implementation.”
A research study examining the implementation progress of the UN Plan of Action in Pakistan prepared by the Institute of Research, Development & Advocacy (IRADA) was also launched at the event.
The report shows that the various stakeholders of journalists’ safety in Pakistan have altogether produced significant actions with short to medium-term implications, giving the country an overall score of 1.64 on a scale of 0 to 3. However, the report notes that this performance has not been able to reduce or end impunity in attacks on journalists.
A panel discussion with journalists Senior Journalist and PJSF member Asma Shirazi, Digital Rights Foundation Executive Director Nighat Dad, CPNE member Jabbar Khattak, AEMEND representative Muhammad Usman, Senior Journalist Saleem Shahid, and Freedom Network Executive Director Iqbal Khattak was conducted. The speakers shared suggestions to improve the physical, financial, and digital safety of Pakistani journalists in the future.
The participants unanimously endorsed the Islamabad Declaration at the event to suggest the following six steps to improve the safety of journalists:
1. The federal and Sindh journalists’ safety laws must be activated to deliver on their promises.
2. Blanket legal support for combating impunity of crimes against journalists should be provided by passing similar legislation on safety of journalists in Balochistan, Khyber Pakhtunkhwa and Punjab.
3. The federal government must amend the federal law on safety of journalists to remove its Section 6 that forces journalists to prove ‘good faith’ to qualify to benefit from the law.
4. Journalists must be taken out of the purview of any restriction on online expression through laws such as cybercrime law or other regulations.
5. The federal and provincial governments must announce support for an end to restrictions, attacks and intimidation of women journalists, both offline and online.
6. Ahead of the next general elections, all political parties must include a separate section in their manifesto guaranteeing safety of journalists, freedom of expression and right to information.
Caption: Prime Minister Shahbaz Sharif addresses the Islamabad Journalist Safety Forum on 6 December 2022 in Islamabad.
#isbjournosafeforum22 #EndImpunity
Link to IRADA report: https://irada.org.pk/…/UN-Plan-of-Action-Assessment…
(Visited 11 times, 1 visits today)
Tags:#DigiMAP, #Disinformation, #EndImpunity, #FakeNews, #FreedomNetwo, #FreedomNetwork, #Indonesia, #ISBJournoSafeForum22, #PakistanMedia, #Philippines, #PMShahbazSharif, AJSC, IMS, Pakistan, PFUJ