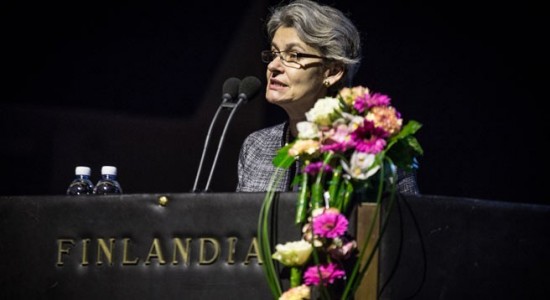 More than 1000 media practitioners and stake holders, including representatives of governments called on UNESCO’s 195 Member States to “reaffirm that press freedom and the right to information are essential for a free, independent and pluralistic media and crucial to the advancement of human rights and sustainable development.”

In keeping with the new Sustainable Development Goals set by the United Nations for the next 15 years, theFinlandia Declaration stresses the importance of access to information and the responsibility of states in making public information available both on and off-line, and promoting universal access to the internet.

It also calls on states to ensure the safety of journalists, whose vulnerability to violent attacks undermines press freedom and freedom of information in many parts of the world.

The Declaration furthermore recognizes the pertinence of UNESCO’s 2005 Convention on the Protection of and Promotion of the Divesity of Cultural Expression, artistic freedom and cultural diversity to the exercise of the fundamental human right of freedom of expression.

Participants at this year’s main World Press Freedom Day event, organized by UNESCO and Finland, lauded UNESCO’s Executive Board decision to celebrate an International Day for Universal Access to Information on 28 September every year.

During the two-day conference, the Director-General of UNESCO, Irina Bokova, the Prime Minister of Finland, Juha Sipilä and the host country’s President, Sauli Niinistö, highlighted the paramount importance of press freedom and freedom of information for sustainable development, good governance and a basis for all freedoms.

Former President of Finland and recipient of the UNESCO Félix Houphouët-Boigny peace prize in 2007 and the Nobel Peace Prize in 2008, Marti Ahtisaari, also spoke of the link between press freedom and peace building during his address to participants at the close of the event.