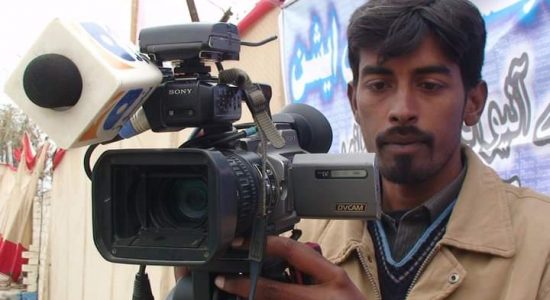 A Christian journalist in Khyber Pakhtunkhwa and district correspondent in Bahawalpur were murdered as 18 other cases of detention, offline harassment, assaults, verbal threats, legal cases and robbery were documented against journalists in all parts of Pakistan during December 2020 by Pakistan Press Club Safety Hubs Network programme, an award-winning civil liberty organization Freedom Network is managing since early 2016.

MURDERED: 37-year-old Christian journalist Qais Javed was shot dead at doorstep of his home in southern Dera Ismail Khan city of northwestern Khyber Pakhtunkhwa province on 8 December 2020, police and family members confirmed. The family lodged First Information Report local police station against unknown attackers. The police made no arrests till the filing of this report and motive for his murder remains unknown. Qais was the sixth journalist killed in 2020. He worked with Geo News TV channel as cameraman for 10 years in Dera city before launching own web-based channel “Ahed Nama.” The family said Qais had no personal or family feud with anyone nor they held any individual or groups accountable for his murder. Dera Ismail Khan experienced violence linked to Taliban militants, sectarian groups and tribes. The city is not safe for independent and professional journalism.

In Bahawalpur, Malik Nizam Tani, correspondent of Daily Pakistan newspaper, did not sustain wounds after he was attacked on 04 December 2020 when armed Muhammad Mauviya and his accomplices launched the attack hitting him on his head with clubs. Bleeding started from the head of the journalist. The attackers said they would “kill the correspondent.” The journalist was taken to Rural Health Centre for treatment. However, he succumbed to head injuries before he reached the centre, his parents told Freedom Network. No motive of murder was determined yet as Freedom Network putting pieces of evidence together to reach any conclusion.

On 04 December 2020, Izhar Khan Niazi and his two video journalists, working for web-based TV-Today, were detained after management of Blue World City attacked the three journalists for covering the housing society’s officials appearance before a police officer in Chauntra Police Station in Rawalpindi district. The police stood silent spectator while the housing society officials attacked the journalist. The journalists, in self-defense, counter-attacked. Upon this, the police arrested the three journalists who got bail the second day.

On 09 December 2020, police detained Zahid Abbasi, president of Kashmir Journalists Forum and reporter of state-run Associated Press of Pakistan in district Bagh in Azad Kashmir. He said he was detained after asking a question from police officials who were inspecting bazaars and markets. The police were allegedly taking socks and other items from roadside vendors who protested police behavior and shouted. The journalist went to ask the police after introducing himself as journalist. The police took him to police station to put in lockup. The police later offered apology to reach a settlement.

ASSAULTED: Iqrar ul Hassan, who hosts a show on ARY News conducting raids on public places to point out alleged illegalities by public and government officials was attacked in Lahore on 12 December 2020. “He (journalist) was injured and his face was red with blood,” an eyewitness said. “I don’t know why they attacked me,” the TV show host later told his colleagues. Police said they arrested four persons.

INJURED: Imdad Pholphoto, Sukkur bureau chief of AbbTakk News TV channel, and fellow colleague Altaf Kalwar were attacked in the bureau on 18 December 2020 in Sukkur district. A dozen of attackers from local land mafia stormed the bureau and attacked the journalists with sticks injuring both. The bureau chief received head injuries while Kalwar had his arm fractured. Police arrested three nominated accused and registered a counter first information report against the injured journalists. However, they were not arrested yet.

In Bahawalpur, Punjab, Daily Ausaf correspondent Muhammad Zubair received injuries after he was attacked with sticks on 04 December 2020. The attackers, led by Muhammad Mauviya, threatened to kill the journalist asking him to “quit journalism” or “face consequences.”

VERBAL THREAT: Kashif Zameer who invited a Turkish TV artist threatened TV journalist Hammad Aslam, working for Lahore Rang TV channel, after the journalist aired a report about Zameer for his alleged involvement in many crime and fraud cases. The person hurled threats in his video he posted on social media. Lahore police arrested the person for hurling threats.

In Islamabad, police registered First Information Report (FIR) No.751/20 on 11 December 2020 against blogger Ahmad Waqas Goriya for allegedly “instigating army officials against armed forces.” The complainant against the blogger, who is living in exile abroad, was Muhammad Yousaf Khan, son of an army official. He stated that Goriya’s instigation asking army officials to stand up against army leadership “hurt” him as “patriot” Pakistani urging the police to take action against the nominated accused.

ROBBERY: Karachi-based senior journalist Ghulam Mustafa reported 05 December 2020 that some unknown persons smashed window of his car in Gulshan-e-Iqbal 13/C area to take away his laptop, purse, five thousand rupees, a mouse, ID card, credit cards, USB, power bank. They made their escape after the incident. Aziz Bhatti Police Station registered an FIR. However, no arrests were made so far no investigation conducted to trace down the perpetrators of the crime.

In eight out of 19 threats journalists faced the state actors – police – were involved; in seven cases others while in three cases perpetrators of the crimes were unknown.