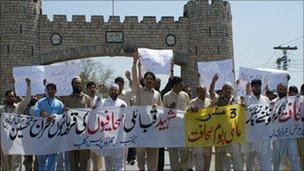 Due to security concerns in areas of FATA and the Khyber Agency, tribal area journalists face difficulties in carrying out their duties effectively. Reporting and shedding light on domestic issues in areas such as FATA has become an increasingly difficult and arduous task. Although in recent days stern action has been taken against the perpetrators of terrorist activities, there remain certain dangers that prevent the presence of an independent media in the region and make the task of reporting at will quite difficult. Keeping in mind the current circumstances, the role of the media is imminent in these tribal areas as the locals here are well aware of the importance media has on their daily lives. The public places its responsibility in the governmental institutions – closely followed by the media. On many instances, the media is taunted as to why they fail to present clear facts to the viewing public. The simple answer to this rhetorical question is that by revealing the truth in each and every matter, the lives of the people in this sector are inevitably placed at risk.

When one of FATA’s senior investigative journalist Islam Gul Afridi was asked about the difficulties local journalists face when carrying out their duties and what security concerns are there for journalists working in the periphery of FATA, he promptly stated that not only do the people of FATA face a long standing crisis of a paucity of basic necessities, it is impossible for the local journalists to carry out independent and objective reporting. He further went on to add that “areas such as Miranshah and other adjacent villages of the Khyber Agency and North Waziristan are ones where even on the 14th of August, the local journalists were abstained from reporting and were demanded to present a No Objection Certificate (N.O.C.) to cover the day’s events.” He further added that there are numerous restrictions on journalists in the tribal region and that journalists from other parts of the country should visit this area to see for themselves the situation that the local journalists find themselves embroiled in. He stated that the recent Parachinar suicide blast has radically changed the complexion of the journalists. In lieu of this event, the FATA secretariat issued a notification for journalists willing to travel to Parachinar from different parts of the country. Now, no journalist can come to Parachinar without an issued No Objection Certificate (N.O.C.)

For a reporter, the governmental institutions tend to create the most hurdles in his line of work. All of them are working to undermine the efforts being put in by the media. The most substantial evidence to corroborate these claims is to enquire the duty of the current Director General of Media in FATA, stationed inside the FATA Secretariat, as he continuously intermingles with the tasks of the provincial government of FATA. The irregularity of the governmental institutions is reflected by the fact that such an important post be designated to a contractual head or a person unaware of the media’s actions.

Another one of FATA’s senior journalist and the former president of the Tribal Union of Journalists, Khan Afridi is on record when he said that currently there are more than 270 local journalists working in FATA out of which 14 have been killed and numerous others injured. He claims that just as the local population has suffered losses (in the form of human deaths) so has the media contingent in the area been adversely affected and has suffered monetary losses amounting to millions of rupees. “Our houses have been razed, our fellow brothers have been martyred but neither have any governmental organizations nor have any international forums supported us monetarily for the losses that we have suffered. The children of the deceased journalists struggle to make both ends meet and are devoid of any educational or health related facilities.”

Similarly, the ‘tehsil’ of Bara – a part of the Khyber Agency and located at a sparse distance of a few kilometers from Peshawar is another region where freedom of speech of journalists is not permitted. Over here, journalists are scrutinized as they are thoroughly checked at the check posts – something of a norm here. The security forces keep a close look out for the interaction between the local journalists and the mass population. They (security forces) have the final say over which news needs to be broadcasted over the airwaves and nothing can be broadcasted without their final consent.

The government should enact a stringent policy to ensure that independence in reporting in FATA. In addition to this, the government should ensure that all security agencies and law enforcement agencies are instructed not to become a source of infringement in the media’s path to freedom of speech. Lastly, the endorsement of a PEMRA Act – similar to the one applicable throughout the rest of the country, will go a long way to bring about stability within the region.

The author is tribal journalist from Khyber tribal region.