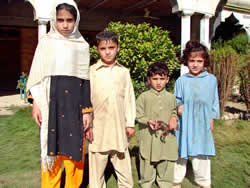 It has been more than six years since a Peshawar High Court judge completed inquiry into circumstances of murder of the tribal journalist Hayatullah Khan. The court’s findings have not been made public yet. Meanwhile, his family’s long and agonizing wait to receive justice and see an end to impunity for killers continues.

“It has been a long time since the judicial inquiry was completed but its findings have been kept secret”, Ehsanullah Khan, brother of the slain tribal journalist from North Waziristan, told the Freedom Network in Peshawar on August 28. “It is frustrating to see that undeniable evidence pointing out the killers of our brother, who was a brave journalist doing his duty of informing the country about developments in the tribal areas, has not been made public.”

Hayatullah Khan, 30, was found dead on June 16, 2006 near the Mir Ali town in North Waziristan where Taliban and al-Qaeda-linked militancy has grown since Pakistan joined the US-led coalition on war on terror in 2002. The young journalist’s body was found six months after he was kidnapped from Bannu-Mir Ali road on December 5, 2005.

His disappearance came immediately after he took and released pictures of a drone attack in North Waziristan that contradicted the Pakistan government’s official statement.

The family experienced yet another tragedy when late Hayatullah Khan’s widow was also killed in a bomb explosion inside her house in Mir Ali on November 17, 2007. The bomb was planted next to her bedroom. She was believed to have information about the identity of who may have killed her spouse, something that Hayatullah shared with her before his disappearance and death.

Upon demands from the journalist community, the federal government ordered a judicial inquiry by a judge of the Peshawar High Court. Justice Muhammad Raza Khan recorded statements of Hayatullah’s family members and others and handed over a 32-page report to the government on August 31, 2006.

The judge promised, said Ehsanullah, to hand over a copy of the findings to the deceased journalist’s family. “But we have not been given the report,” he claimed. “Still, we hope perpetrators of the crime will be arrested and the inquiry findings will be made public. We have testified before the judge against those involved in our brother’s murder. They are still alive. We hope his killers will be brought to justice.”

Ehsanullah’s life is hit hard by Hayatullah murder. He looks after the four children – two daughters and as many sons – of the slain journalist.  The family has been forced to leave their ancestral home in Mir Ali to stay in Peshawar for reasons of safety and education of the children.

The French media rights group Reporters Without Border  had this to say about Hayatullah’s case: “We continue to suspect that Khan was killed for investigating the death of Hamza Rabia, a leading Arab member of Al-Qaeda. The Pakistani army’s claims that Rabia was killed in an accidental munitions explosion were contradicted by Khan, who had photos taken at the scene indicating that he was killed by a US missile.”

Said Ehsanullah: “It is frustrating to see the government unwilling to release the inquiry report, to see the killers of our brother still at large. But we will continue raising voice for justice and an end to impunity for killers of journalists in Pakistan. The day will come when justice will be done.”