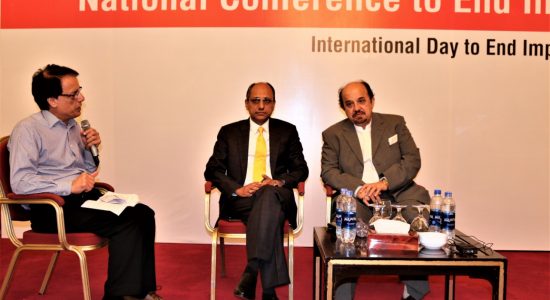 KARACHI: 13 November 2019: Sindh Minister for Information and Broadcasting Mr Saeed Ghani announced Tuesday (12 November 2019) that Pakistan People’s Party’s government in the province would do legislation to combat impunity for crimes against journalists and media and protect them.

The announcement, received warmly among the journalist community, civil society and media rights organizations, was made during the National Impunity Conference to End Impunity organized in collaboration between Islamabad-based media watchdog organization Freedom Network and Council of Pakistan Newspaper Editors in Karachi which was attended by senior editors and journalists.

“I don’t think there’s any issue in that … it will be reviewed by the law department if any changes are required,” Mr Ghani told the Conference. “I am 99 percent sure that it [the law on journalists’ safety] will be passed by the Sindh Assembly.”

Pakistan is one among the top countries where impunity for crimes against journalists and media is very high as no single convict in murdered journalist cases had ever been punished.

Mr Ghani said there must be unity among the ranks to take corrective measures in the prevailing “environment of fear. At some point we will have to say no… the problem is with the society and we will have to correct it together.” 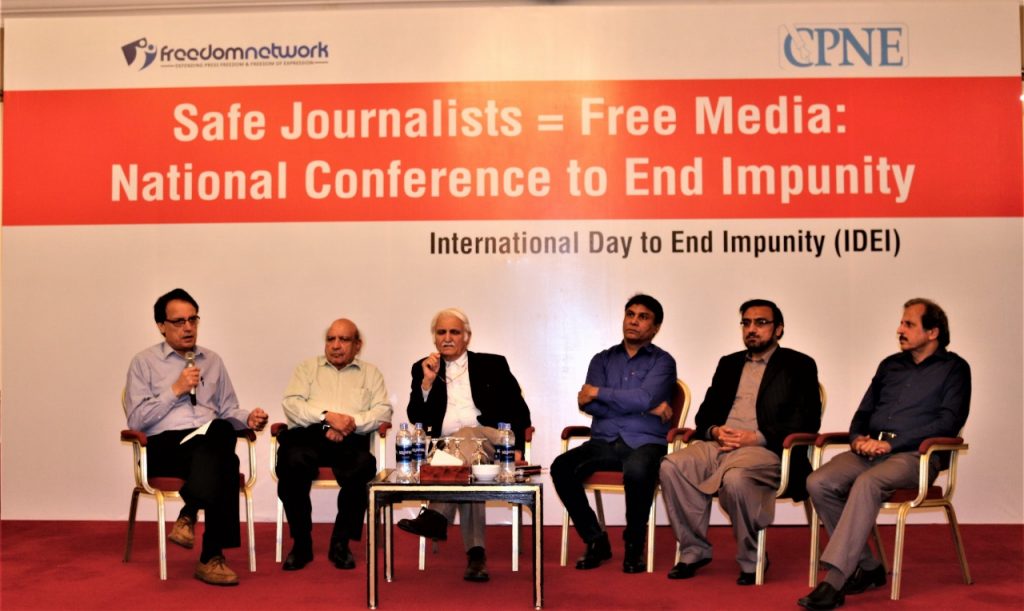 Journalists in a panel discussion take a look at state of impunity for crimes against journalists in the country during the National Impunity Conference in Karachi on 12 November 2019.

“The draft which was presented before a Senate sub-committee during tenure of the last government has now been shared with the Sindh government and the Mr Ghani assured us to get it through,” Iqbal Khattak said.

CPNE President Arif Nizami told the Conference the biggest challenge facing the press today was its survival, which could only be met through unity in its ranks. “CPNE and Freedom Network will work together to combat impunity and protect journalists,” he said adding that he witnessed martial laws in his long cherished journalism career, spanning over 40 years, but “today’s restrictive and suffocating environment is unprecedented.”

Ihsanullah Khan, brother of slain tribal journalist Hayatullah Khan, whose widow was also killed in a bomb explosion a year later, from North Waziristan, told the Conference what pain they experienced when the journalist was found dead six months after he was disappeared in 2006 in North Waziristan after he took photos of missiles fired from unmanned drone.

“After the tragedy, we left North Waziristan for Peshawar… I was very young and had no means to earn livelihood. We had a hard time but thanks to some senior journalists who supported the family.” He regretted that the organisation late Hayatullah was working for did not support him after his death. 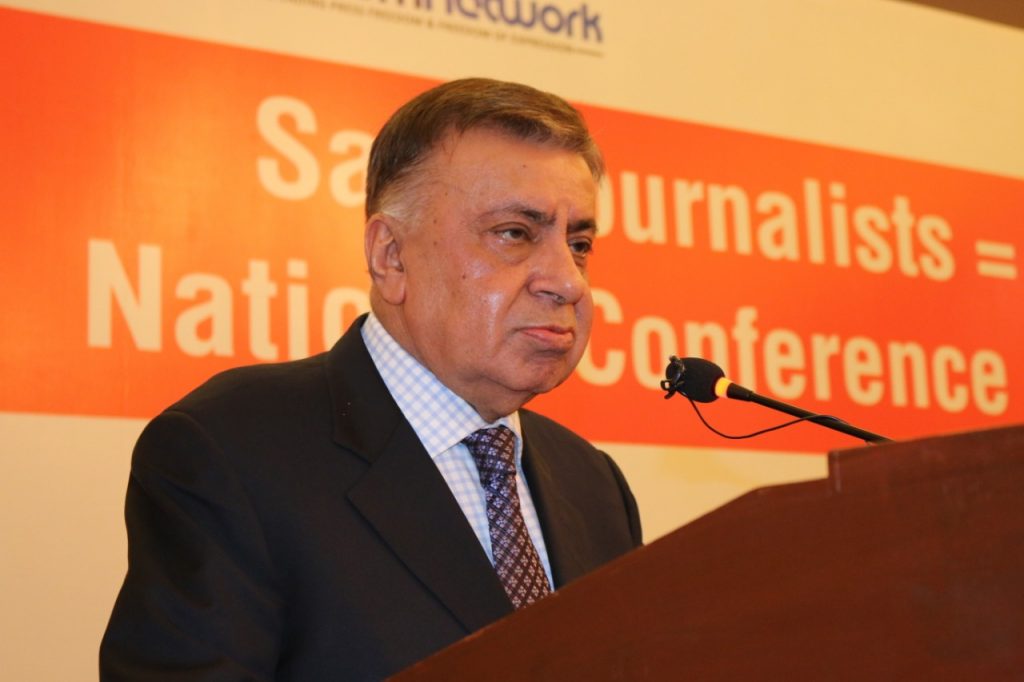 Ihsanullah called for an insurance policy media organizations should have for their staff members as well as a special law for protection of journalists. “Life insurance policy should be introduced for journalists so when they are martyred at least their families can survive,” he pleaded. “No one should experience what we went through … there should be legislation for the protection of journalists … no one should be able to kidnap, torture or kill them and escape with impunity.”

Veteran journalist and human rights activist IA Rehman also spoke on the occasion. He said disinterest to combat impunity for crimes against journalists and media aimed at “weakening Freedom of Expression.” He said that all stakeholders should come together to defend Freedom of Expression by putting pressure on the federal and provincial governments to enact special laws to protect journalists.

Farhatullah Babar, who is one the strongest voices in support of special law to combat impunity and protect journalists, said that there was no other option with the political governments in Pakistan to enact special laws to bring perpetrators of crimes against journalists and media to justice.