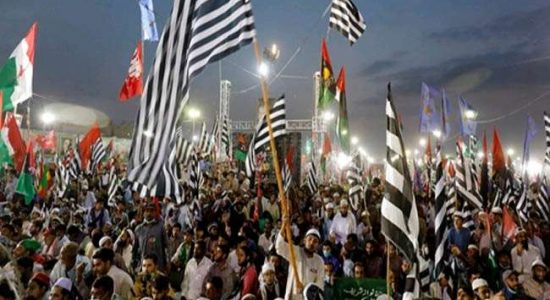 ARRESTED: On 3 November 2020, Hasnain Shah, crime reporter at Capital News TV channel was covering a protest at Chowk Neelam Cinema in Lahore during late hours when he was arrested by the police for allegedly being involved in the protest itself. The protest had taken place on 30 October 2020 after which a FIR was registered against the reporter. The Dolphin Force, in the FIR registered against Hasnain, claimed that he had threatened them not to force the protestors to disperse and had also provoked the people against the police – hampering their duties. Later on, he was released on bail when the pressure on police grew, as the local journalist fraternity held relentless protests against the arrest.

DETAINED: On 6 November 2020, a court reporter at Pakistan Television, Imran Mansab Khan, was illegally detained and banned on false charges of harassing a woman in the court. Imran was accused of taking pictures of the woman and threatening her in the court. The reporter was arrested by the police on the order of judicial magistrate Waqas Hussain Gondal, as he tried to inform police that he was on duty and also presented his official press card. He was detained without any process of verification in the Margalla Police Station. He was released upon Chief Justice Islamabad High Court’s intervention. The Islamabad High Court Reporters Association had demanded Chief Justice to initiate swift inquiry into the case which led to the release.

Another journalist, Naeem Asghar, a reporter at BOL News TV channel was covering a furniture exhibition at a hotel near Rawal Chowk in Islamabad on 22 November 2020 when his cell phone was snatched and data removed from the phone on the orders of organizer. As per the copy of reporter’s complaint to the police, Naeem was interviewing the organizer (Hamza Rehman) about the exhibition. It was going smoothly until the reporter’s question to the organizer about the cancellation of NOC, as the latest Covid advisory by the Deputy Commissioner Islamabad prohibited public events. The reporter was detained in a room at the venue and threats were hurled at him by the assailants. Police arrested the organizer upon the reporter’s complaint after which the exhibition organizers and hotel administration contacted BOL News channel for reconciliation. The organizers gave their unconditional apology to the reporter due to which was the case was resolved in writing.

OFFLINE HARASSMENT: On 16 November 2020, Qaiser Shah, photojournalist at Daily Dunya newspaper, was harassed by the Tehreek-e-Labaik Pakistan protestors as he was taking photos of the protest. According to his application to Rawalpindi-Islamabad Union of Journalists (RIUJ), the protestors snatched his camera and barred him from covering the protest. Other senior journalists present at the scene intervened, upon which they returned the journalist his camera but only after deleting all the photos. The protestors also made him promise not to cover the stoning at the protest.

On 29 November 2020, BOL News TV channel bureau chief Amber Javed, was barred from coverage by SP City Multan, one day before the Pakistan Democratic Movement (PDM) rally. Despite the ban, the journalist arrived at the rally for coverage during which he was manhandled by the SP city which was also caught on live broadcast. He was covering the arrest of Ali Musa Gillani who was responsible of arranging the PDM rally. The journalist was also verbally abused and threatened by the police.

Shahzad Fareed, the bureau chief of GTV News channel, was arrested from Ghanta Ghar in Multan on 29 November 2020 as he was covering the arrangements of the next day’s rally of Pakistan Muslim League – Nawaz (PML-N). The journalist was pushed inside the police van where his camera was snatched and abusive language was hurled at him. He was detained at an unknown location by the police for a period of 40 hours after immense pressure on police by the local journalist fraternity.

On 29 November 2020, Waseem Nasir, a reporter of Dunya News TV channel, was also barred from coverage and harassed at the Ghanta Ghar in Multan, where Rana Sanaullah was overseeing the arrangement for the PML-N’s rally. According to video clipping, the reporter was harassed by four police officials at the scene, and the SHO could also be seen threatening him with FIR. His camera was also snatched. The police alleged that the reporter had broken the grill fixed at the Ghanta Ghar, which comes under damaging public property.

A show-cause notice was issued to ARY News TV channel for discussing sub-judice matters, while BOL News channel was presented with a fine for airing censored words during National Assembly session transmission.

Six television journalists and one print journalist encountered cases of threats, attacks, and harassment during November 2020.

State authorities were reportedly involved in about five cases whereas a religious group (TLP) was also involved in a harassment case against a journalist. In one of the cases, the threat actors remained unknown.