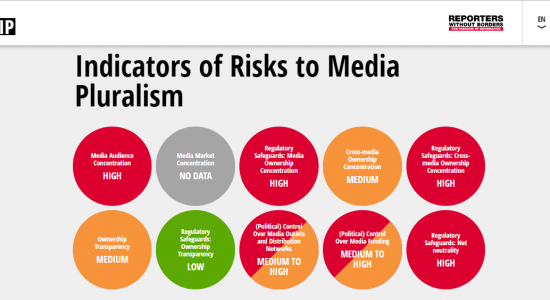 ISLAMABAD, Pakistan, 18 July 2019: A collaborative research study, the Media Ownership Monitor (MOM) Pakistan – carried out by the global media rights organization Reporters Without Borders and Pakistani media watchdog Freedom Network – has found Pakistan a “high risk country” in terms of media pluralism. More than half of the mass media ownership is concentrated in only a few hands.

“This means Pakistan needs more broad-based media ownership to ensure greater diversity in news sources,” Iqbal Khattak, Executive Director of Freedom Network, said to underscore the importance of this unique research which the stakeholders could use to debate whether or not the country needs more diversity in its media ownership as well as news and views.

The Media Ownership Monitor Pakistan is now publicly available online at http://pakistan.mom-rsf.org in English and Urdu from July 18.

“Real freedom of the press means more than the absence of state repression. Only if media landscapes are diverse and pluralistic and only if journalists enjoy maximum independence the media can hold up to its democratic mandate to provide a spectrum of different opinions to inform citizens,” Christian Mihr, Executive Director of Reporters Without Borders Germany, said in Berlin.

Due to stringent visa regulations, no representative of RSF was able to enter Pakistan for the course of the research or the presentation of the findings.

The findings of MOM Pakistan were revealed in Islamabad on 18 July 2019, after a team of researchers worked for eight months to retrieve and analyse all available data from official and non-official sources, including the government, media houses and their owners. Audience share data was acquired form a third party source, Gallup Pakistan, and publicly available data obtained from company registry offices in Islamabad, Karachi and Lahore after fees payment with the Securities and Exchange Commission of Pakistan.

MOM Pakistan researchers also approached the federal and four provincial governments to seek official data on advertisement rates and payments made to the selected sample of media houses. Neither federal nor the provincial governments, however, shared the requested information – except for the Khyber Pakhtunkhwa government, which is ruled by the Tehreek-e-Insaf party of Pakistan’s Prime Minister Imran Khan and which provided at least partial information.

Information requests were also sent out to all owners of the media outlets investigated, but only one newspaper group owner, one TV outlet owner, two private FM radio stations’ owners and one website owner responded and agreed to share at least partial information. Also the federal government was unresponsive to share the ownership structure, revenue and net profit data of state-owned Pakistan Television, Radio Pakistan and FM 101 for the 2017-18 financial year.

To assess the country’s risk to media pluralism, also in comparison with the existing twenty other country editions of MOM, ten indicators were computed, including criteria like media audience concentration, cross-media ownership concentration, regulatory safeguards, political control over media outlets and net neutrality. As a result, four indicators showed ‘high risk’, two showed medium to high risk, two medium risk, only 1 – a ‘low risk’ and one could not be technically ranked due to unavailability of data.

News media concentration in Pakistan, in terms of both ownership and audience share, is very high. The top four television channels, radio stations, newspapers and news websites cover, in each of the four categories, over 50% of the country’s entire audience share. If diversity of ownership reflects diversity of sources of information, then the Pakistani audiences are restricted by limitation of choice and plurality.

Cross-media ownership concentration, which measures concentration across media sectors, indicates a high risk in Pakistan. The top 8 owners reach 68% of audience share across television, radio, print and online. However, the numbers are likely to be higher, since the reach of these owners through various other media outlets they operate were not taken into account due to lack of audience data. The top 8 players in the Pakistani media are Jang Group, Express Group, the Government Group, Nawa-i-Waqt Group, Samaa Group, Dawn Group, Dunya Group and ARY Group – – all have significant presence in more than one media sector. In terms of audience share, the biggest cross-media owner (Jang Group) controls over a third of the market among the top 40 media entities. TV and online media outlets are the most prone (7 of 8 media groups) to cross-media ownership, while radio is the least (3 of 8 media groups). The government is among the top three cross-media owners (Pakistan Television Corporation, PTV, Pakistan Broadcasting Corporation,PBC, and the FM 101 stations in the country.

The new millennium saw a radical transformation in the landscape of Pakistani media in terms of size. In 2002, before the country opened up the broadcasting sector for commercial players, only one state-owned TV channel and one radio station were on air. Now in 2019, a total of 88 TV channels (including news and entertainment) and 209 radio stations are broadcasting, according to Pakistan Electronic Media Regulatory Authority (PEMRA). The numbers of journalists in the same period ballooned from about 2,000 to over 20,000 and the overall number of people associated with the media industry to about 250,000. This expansion of the media industry came off the back of improving economic fundamentals, an increase in per capita income and a rise in consumer economy, including a growing surplus in private incomes accompanied by an expanding advertising sector.

Pakistan’s official news agency Associated Press of Pakistan (APP) reported in 2017 that there had been a cumulative investment of USD 4 billion in the electronic media industry in Pakistan between 2002 and 2017 and it was estimated to touch USD 5 billion by end of 2018. It said the overall national growth contributed significantly to the development of the electronic media industry in the private sector and helped expand the work of media groups, content production houses, advertising agencies and the performing arts.

However, the second half of 2018 brought bad tidings. Pakistan’s media industry, once viewed as among the most vibrant in South Asia, started to decline with close to 2,000 journalists and media workers reportedly laid off and several outlets shut down. The situation was partly affected by the ailing economy, partly by the outcome of the July 2018 elections that brought a government to power headed by a party not seen as friendly to business, coupled with the withdrawal of government subsidies and dwindling advertising revenue. This forced even big and stable media groups to shut down publications and lay off journalists. The Jang Group – the country’s largest media group – shut down three of its publications and two bureau offices, leaving more than 1,400 journalists and related staff jobless in one single day. Express Media Group and Dunya Media Group – the third and fourth largest media groups – also laid off over 200 journalists, cutting the salaries of the remaining workers by 15 to 35 percent.

The MOM research also analyzed the existing regulatory framework, particularly in terms of both concentration control and net neutrality. The findings were that the regulators are often seen as overtly pushy on regulating the content rather than being facilitators of the industry, setters of professional standards or protectors of media consumer rights. This contributes greatly to the massive concentration of media ownership.

Besides, the regulatory framework lags behind the current market developments including convergence of technology and emergence of online media. For example, the laws do not specify any thresholds necessary for measuring ownership concentration, either of audience share, circulation, turnover/revenue, the share capital or voting rights. “While it is essential to have comprehensive legislation for protection of net neutrality to safeguard media diversity and guarantee equal ability to access and disseminate information, opinions, perspectives, etc. online, there is no such legal framework in this regard in the country,” the findings read.