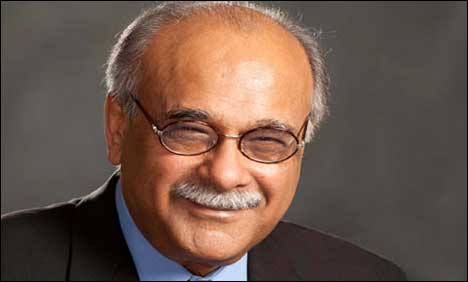 Why should Najam Sethi, one of the most prominent names in Pakistani journalism, have to accept the position of a ‘caretaker’ of a non-journalism enterprise? In February 2014, he was once again been appointed as the Ad Hoc Chairman of Pakistan Cricket Board (PCB) – the second time in six months. Then, he was elected as chairman of the PCB by the ad-hoc committee members. In the past also he served variously in other non-journalism positions of caretaker minister and caretaker provincial chief minister. While serving in these non-journalism positions, he never quit journalism and continued to also serve as a journalist.

It has always been very difficult for a journalist, no matter how prominent he or she may be, to defend their appointment to positions other than those linked with journalism. Even now currently serving as PCB chief Sethi simultaneously has a journalistic platform (as the co-host of a prominent current affairs analysis show on a major TV channel) and can, thus, defend himself in his show for any criticism that may come his way relating to his non-journalism work. But is this ethical from a journalistic perspective? The conflict of interest does not involve merely financial matters (as the job of PCB is honorary) but ethical issues as well.

There is another senior journalist in this Ad Hoc Committee tasked by the Prime Minister to oversee PCB affairs for at least three months – Mr Shakil Sheikh of The News. This is not the only non-journalism position that Sheikh has been associated with while continuing to work as a journalist. He has long been associated with the Rawalpindi Cricket Association (RCA) and also served on several positions of RCA and PCB in the past also. It beggars the question: can he write on cricket matters as a journalist while simultaneously also be one of the administrators of PCB? Is this not a blatant conflict of interest?

Unlike his first brief tenure as ad hoc chairman of PCB, Sethi, when he did not face much criticism, this time round he is under fire within the media and by the media. In addition, Chairman Pakistan Tehreek-e-Insaf Imran Khan, currently politician but one of the cricket world’s best sportsmen ever, has also taken him to task and linking his appointment with the May 2013 general elections alleged that this appointment is “a gift” to him for his role as caretaker chief minister, which saw Nawaz Sharif emerging as the prime minister.

Now Sethi may find it difficult to criticize Imran on political matters, which he has been doing in his TV show, because now Khan has questioned his appointment as chairman PCB. Convoluted conflict of interest juggling journalism and non-journalism responsibilities simultaneously?

Here Sethi will be facing tough time as a chairman PCB though his task is to make a new constitution for the beleaguered cricket board and hold its elections. He could have saved himself exacerbating his conflict of interest by nominating someone – like fellow ad hoc committee member and former PCB chairman Shahryar Khan. Prime Minister Nawaz Sharif, who is Patron-in-Chief of the PCB, could have restored the 1999 PCB Constitution and let its General Body elect its chairman within a month.

It is now being said that an elected government, which is the defender of the country’s constitution, has itself abolished not once but twice the constitution of another institution (PCB) within six months. Sadly, one of the senior journalists and TV anchorpersons, whom we were expecting to give his thought provoking comments by taking a high moral ground, also become part of the story.

I have known Sethi and his charming wife Jugnu for over two decades now. It started with us meeting in the monthly Herald office and they asking me to start writing for their popular weekly magazine, The Friday Times (TFT). I always admired the editorial in the TFT, the magazine for which I myself contributed for over a decade. Those who have worked with him at Daily Times also admired him for his editorial independence and powerful journalistic skill. I wondered then why such a prominent name in the field of journalism needed a political position or for that matter, any position other than the journalistic one.

When Sethi was detained and picked up allegedly by the ISI, in Nawaz Sharif’s tenure in the 1990s for his speech in India, Pakistan’s journalist’s community stood behind him and ultimately forced the government to release him. Later, he joined the interim government, when Sharif was dismissed. Today it seems they get along rather swimmingly.

We do have a few examples from around the world where journalist, editors and media owners accepted political positions at the cost of ‘journalism’ but most of them first quit the profession or announced their retirement from journalism first. For instance, when renowned Indian journalist M J Akbar decided to join politics, he formally quit journalism. In Pakistan also there were some prominent names – from Faiz Ahmad Faiz (former editor of Pakistan Times) to Altaf Hussain (former editor Dawn) – but I don’t remember any of them holding dual offices.

You can’t and you should not play ‘ping pong’ with journalism. Perhaps that could be one reasons why our elders always advised us to keep a distance from the politicians. Consider them as your ‘source’ not your ‘friend,’ they advised. Strong ethical practices demand that journalists are even supposed to pay for their meals or tea even when invited by ministers and politicians.

Journalists and government are always adversaries. How can you accept any offer from them and then claimed yourself as an ‘independent’ journalist? No sir, it’s not possible. Positions like ad hoc PCB chairman or caretaker chief minister are too small for powerful and respected journalists like Sethi whose followers and admirers must run into hundreds of thousands if not millions. I’m not sure why one would choose to jeopardize such a reputations earned from decades of good journalism. While only Sethi can justify why he chose to wear two hats but I would certainly like to see him back as a journalist rather than a non-journalist. He can be both at the same time. He needs to quit one for the other. Will he make the right decision? Let’s see.