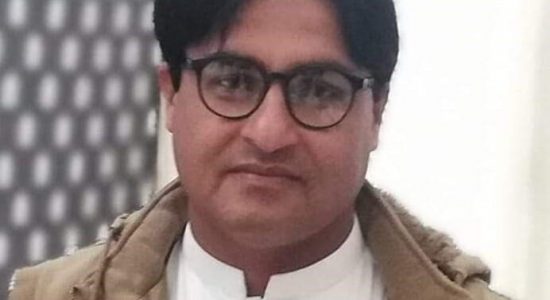 A journalist was murdered, another survived attempt to murder while seven other cases of arrests, offline harassment, verbal threats and a legal case were documented against journalists in Punjab, Sindh and federal territory Islamabad during May 2019 under Pakistan Press Club Safety Hub Network, managed by media watchdog organization Freedom Network.

A total of nine cases of violations were reported during this period. Federal territory Islamabad topped the list where five violations reported and followed by Sindh (two) and Punjab (two) respectively.

KILLED: Karachi-based Daily Awami Awaz reporter Ali Sher Rajpar was gunned down in Padidan station in Naushehro Feroz district of Sindh province on 5 May 2019. His murder took place days after he reportedly told senior police official Faizganj that he was “under threats” from Padidan Town chairman Shakil Rajpar and other Pakistan People’s Party leaders.

The family nominated Union Council chairman Shakil Rajper in the First Information Report Freedom Network obtained through journalists in the area. The family told Freedom Network that they had no personal enmity with anyone.

ATTEMPT TO KILL: Muhammad Javed Siddiqui is Dera Ghazi Khan-based journalist and works for Nawai-e-Waqt newspaper. He embedded with police to a crime scene on 21 May 2019 where rival group attacked the opponents and journalist was caught wrong-footed. Reports suggest police did not challenge the attacking rivals and fled the scene. Meanwhile, the attackers fired around 500 bullets to eliminate the rivals and journalist was included who the attackers believed was taking side with the rival group to support them through his media reports. The journalist received face injuries and treated in a hospital. However, he went into hiding as the attackers are aiming him, local journalists told Freedom Network.

Dera Ghazi Khan is a semi-tribal area in southern Punjab province where family feuds and personal enmity are deep-rooted in the society and rival groups are engaged in unending fights leaving scores killed or injured from both sides and strong feudal system keeps law-enforcement ineffective.

ARRESTS: A group of journalists, including Saleem Sagar, reporter of City-48 TV channel in Lahore, Junaid Butt, Imran Bukhari and Nauman, went to report basic health unit in Sambrial tehsil of Sialkot district in Punjab province on 17 May 2019 where patients were complaining “bad treatment.” Anam Ashraf, medical officer of the unit, locked the journalists in and called police to arrest them. Police came in and took all journalists into custody. All journalists secured bail except Junaid Butt. Locals say the medical officer is “very influential” and “all calls” from journalists’ representative bodies for release of Junaid Butt produced results.

On 5 May 2019, Matloob Hussain Mousavi, reporter of Daily Jang newspaper in Karachi, was arrested two days after he returned home since he went missing on 30 March 2019. Counter-Terrorism Department made the arrest on allegation of “sectarian links.” Super Highway Industrial Area Police Station registered FIR against the young journalist under Sections 4/5 Anti-Terrorism Act. Police disclosed his arrest on 6 May. The family says police charges are “unfounded” and terrorism charges “put entire family members’ lives at risk.”

ASSAULT: Fareed Sabri is crime reporter working for HUM News channel in Islamabad office. On 16 May 2019, he was doing report on ice drugs in posh Islamabad sector E7 when Saad Kiani and Hassan of “Shish House” where young boys and girls are taking ice drugs attacked the reporter and his cameraman. Kiani and Hassan snatched equipment from the crew to stop them from doing professional job. Fareed called his fellow crime reporters who rescued the journalist and got FIR registered against the accused who secured interim bail until May 28. On May 28, the accused did not appear before the court and judge asked police to submit all records and bring the accused to the court for hearing on June 1.

HARASSMENT: Police raided house of Dawn reporter Tahir Naseer for “search purpose” on 20 May 2019 in Rawalpindi city harassing the journalist and his family. “They raided my house because I regularly tweeting crimes in Rawalpindi,” he told Freedom Network. The journalist submitted an application against the raiding police party. A senior police official ordered inquiry into the raid.

On 23 May 2019, a police party, led by senior officer Ahsan Kiyani from Banni Police Station in Rawalpindi, raided house of Daily Jang newspaper’s staff reporter Shahid Sultan middle of night holding the whole family hostage and threatening and humiliating them at gunpoint. The police did not let the family or the journalist know why the raid was taking place. Rawalpindi police chief Faisal Rana “suspended” two cops and ordered inquiry into the raid.

Naseerabad Police Station SHO Riaz Bajwa “hurled life threats” at journalist Mansoor Satti, who works for 92 News TV channel and also member of National Press Club, Islamabad, Governing Body on 24 May 2019. The life threats followed the journalist’s reports highlighting crimes in jurisdiction of the police station. “The police officer threatened to kill me,” Satti told Freedom Network. He submitted application with Rawalpindi police chief for inquiry and registration of FIR against the SHO.

LEGAL CASE:  Reports about alleged encroachment on government lands by trader Sardar Tanvir Ilyas, who is owner of Centaurs shopping mall in Islamabad and chairman of Punjab Board of Investment, landed GNN News TV channel’s senior reporter Babar Anwar Abbasi in a defamation case. The reporter uploaded some reports about the alleged encroachment by Centaurs shopping mall, to his Facebook page between 2 and 6 May 2019. The journalist said he posted several news on his social media account about the mall’s encroachment on adjacent plot and conflict of interest of Sardar Tanvir Ilyas.

In five threat cases state actors – police and hospital officer – involvement was suspected while in four other cases rival group, owners of business entities and a local government official’s involvement were believed.