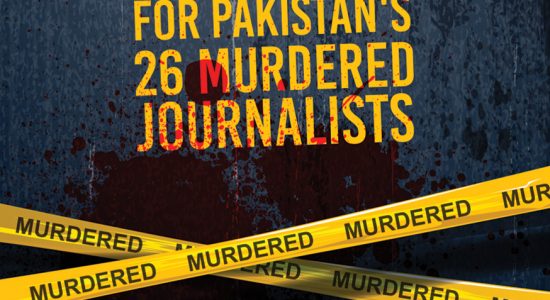 The Impunity of Crimes Against Journalists Pakistan Report 2018

High impunity – 26 journalists killed in Pakistan in 5 years, only 16 cases went to courts, trial completed in only 6 cases, only one conviction awarded but no one punished

ISLAMABAD – 31 October 2018 – Of the 26 journalists murdered in Pakistan during the last five years for their journalism work, the cases of only 16 journalists went to court for trial of which prosecution and trial was concluded in six cases only and conviction handed in one case only.

This was revealed in a new research study tracking and examining the failure of the justice system in prosecuting and punishing the killers of all journalists killed in Pakistan during May 2013 and May 18, released here on the eve of the International Day to End Impunity for Crimes against Journalists observed by the United Nations on November 2 every year.

The impunity enjoyed by the killers of journalists in Pakistan is one of the highest in the world and the murdered journalists and their families have received justice in only one of the 26 cases, and in this case also a conviction was handed down by a lower court, but the accused was able to get the sentence overturned at the high court level.

“Journalists continue to get target killed and threats against them continue to grow and the State’s legal system (police failure) and justice system (courts failure) have failed to provide them justice,” Iqbal Khattak, the Executive Director of Freedom Network said on the occasion to urge all stakeholders of media to join hands to fight back deep-rooted impunity for crimes against journalists and media.

“This means the killers enjoy total impunity with no fear of getting punished for killing journalists. Journalists are dead and their killers are free,” he went on to add.

The ‘Impunity of Crimes Against Journalists Pakistan Report 2018’ has been produced by Freedom Network, a national independent organization that monitors attacks against journalists and works on journalists’ safety issues is titled “Crime and Punishment in Pakistan’s Journalism World: Zero Justice for Pakistan’s 26 Murdered Journalists.”

The report, the first of its kind focusing on impunity of crimes against journalists based on a special impunity index developed by Freedom Network and by examining the FIRs of journalists and interviews with the families, lawyers and former colleagues of the murdered journalists revealed the following startling findings:

The level of impunity enjoyed by killers of journalists in Pakistan is near-complete. The killer of only one of the 26 journalists murdered in the period 2013-18 was convicted (3.5%). The only case of conviction of an accused killer was at the district court level in KP after which he successfully challenged the conviction at the high court level.

Pakistan has been consistently ranked by international media watchdogs as one of the most dangerous places on the planet to practice journalism. The levels of impunity enjoyed by killers of journalists is shockingly high. Over 120 journalists have been killed since 2000 and over 2,000 have been attacked, injured, kidnapped, arrested or intimidated.

Most dangerous medium and province

Memberships of press clubs and unions of journalists

Most murderers of journalists remain faceless and unidentified. The threat sources are identified/suspected by the victims and their families in only one in every three cases of journalists murdered and worryingly include state actors, political parties and religious groups.

In three-fourth cases, the local state authorities were pre-informed by journalists of threats they were facing before being murdered. Despite this avalanche of early warning and threat reporting, the authorities failed to prevent their murders.

In 60% of the cases the police fail to complete the investigations into the murder of a journalist to generate a final challan – or a full investigation report – to submit before a court for trial. Of the 26 journalists murdered, the cases of only 16 reached the court. One in three journalists murdered in Pakistan for their journalism work are this pre-guaranteed to NOT get justice because their case never goes to a court for trial because of the failure of the police. The performance of police in investigation of murder of journalists and producing a final challan is the worst in KP province where only one in six cases reached this stage. In Punjab the police failed to produce a final challan in one-third of the cases and in Balochistan and Sindh in one in every five cases.