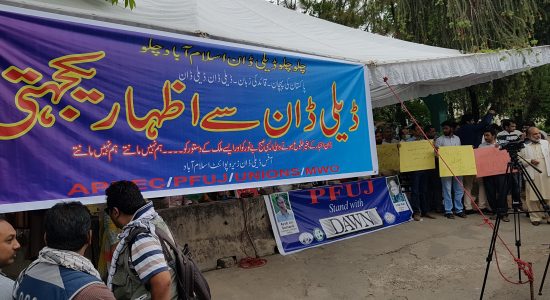 The federal government released on Wednesday – May 10, 2017 – administrative decisions taken after the findings of an Inquiry Committee probing leaks of meeting minutes to Dawn newspaper’s senior journalist in October 2016 directing newspaper owners’ representative body, All Pakistan Newspaper Society (APNS), to take “disciplinary action” against the editor and the senior journalist who had filed the story.

“The government’s directive to APNS to take ‘disciplinary action’ against Dawn editor and its assistant editor is departure from the constitutional right to free press,” Freedom Network [FN], Pakistan’s first media watchdog said May 14, 2017, in a Press Freedom Alert.

“If the story was void of facts or aimed at maligning one state organ or another the government may have taken a legal course to file damage claim instead directing the APNS to take ‘disciplinary action’,” the alert went on to add.

The media watchdog urged the APNS to uphold press freedom as print media always led the struggle for ensuring public right to know. “This case will prove a defining moment for independent and investigative journalism in the country and all state organs, including security establishment, must work to strengthen the media.”

Dawn Editor Zaffar Abbas won applause even from his detractors by maintaining high standards of journalistic ethics while handling the crisis professionally to guard the interests of both his organization, employees and, more importantly, the public right-to-know by not sharing names of sources of information and materials, the Press Freedom Alert added.

FN alert said removal of the federal information minister and principal information officer for reasons that they “failed to stop” the story from being published was formal acknowledgement on part of the government that Pakistan continues to live with censorship in this age of information.

In a statement issued in Islamabad on Wednesday, the Interior Ministry said there “is need to develop a Code of Conduct” for the print media especially when dealing with issues relating to security of Pakistan. “The Inquiry Committee recommended that the role of Daily Dawn (editor) Zaffar Abbas and (assistant editor) Cyril Almeida in the case may be referred to All Pakistan Newspapers Society (APNS) with a direction to take disciplinary action against them,” the statement read.

Cyril Almedia had filed an exclusive investigative report on October 6, 2017, pointing to “differences” between the civilian and military leadership over the issue of fight against militancy and terrorism and the Prime Minister’s House called the investigative story as “fabricated” while the military expressed “deep anger.”

The federal government removed its information minister, principal information officer and adviser to the prime minister on foreign affairs for their alleged roles in leaking “sensitive information” to Dawn newspaper after the pressure on the government increased following the story’s publication.

Both Zaffar Abbas and Cyril Almedia had appeared before the inquiry committee of civil and military intelligence services to explain their position.

Both the editor and the assistant editor had serious reservations on its composition, yet they “fully participated” and presented their point of view before the committee, official sources told FN, saying Zaffar Abbas “refused” to name sources of the story.

Talking to Freedom Network, the editor said if he appeared before the inquiry committee, “we will have no issues appearing before an APNS committee.” However, Dawn editor said the only question “we would like to find the answer for is, on what grounds ‘disciplinary action’ has been recommended?

“We still believe the news story of October 6, 2016, did not breach any security matter or compromised national security. So, why this recommendation? And if the story was not based on facts, as is being alleged, then government will not only have to share the entire inquiry report, but also the deliberations of the committee, including the editor’s and reporter’s testimonies, to help arrive at a definitive decision.”

The Interior Ministry statement added that action on orders of Prime Minister Nawaz Sharif on recommendations of Dawn Leaks Inquiry Committee had already been “completed and the issue stands settled.”

Minutes before the release of the Interior Ministry’s statement military spokesman Maj.-Gen. Asif Ghafoor held a press conference to confirm that the Dawn Leak issue “settled.”

“Recommendations, as contained in para 18 of the inquiry committee report, duly approved by the prime minister, have been implemented, which has settled the Dawn leaks issue,” Maj.-Gen Asif Ghafoor, who heads the military’s public affairs section ISPR, told the press conference.

Relations between the civil and military leaderships worsened after April 29 tweet by the army. However, the military spokesperson said the tweet “stands withdrawn” now.

The increased pressure on the government by the military to “punish” people who leaked information and published the story worried the press freedom activists who believed the military would use the occasion to crack down on the independent media through democratic institutions.

Pakistan Federal Union of Journalists (PFUJ) celebrated May 3 World Press Freedom Day across Pakistan as “day of solidarity” with Dawn newspaper to reject any action against the newspaper after the October 6 publication of investigative story. “The PFUJ will continue to uphold press freedom in Pakistan and attack on Dawn is attack on press freedom,” Afzal Butt, the PFUJ president, told cheering crowd outside the newspaper’s Islamabad office on May 3.

The federal government has banned Cyril Almeida, assistant editor of Dawn newspaper from leaving Pakistan after his exclusive report on differences between the civilian and military leadership over the fight against militancy.

Days after the story published, the federal government banned Cyril Almedia travel outside Pakistan until investigation into the leak of official information about national security is completed, the journalist tweeted.

“I am told and have been informed and have been shown evidence that I am on the Exit Control List,” Almeida confirmed the news on his Twitter account.

In a series of tweets, the journalist, who writes on national security issues and national politics on editorial pages of Dawn newspaper: “Was a long-planned trip, for at least several months now. There are certain things that I will never, ever forgive. I feel sad tonight. This is my life, my country. What went wrong? Puzzled, saddened. Had no intention of going anywhere; this is my home. Pakistan.”

Standing By the journalist

Dawn newspaper published a note from its Editor Zaffar Abbas to clarify and state on the record several things. “First, this newspaper considers it a sacred oath to its readers to pursue its reporting fairly, independently and, above all, accurately. The story that has been rejected by Prime Minister’s Office as a fabrication was verified, cross-checked and fact-checked.

“Second, many at the helm of affairs are aware of the senior officials, and participants of the meeting, who were contacted by the newspaper for collecting information, and more than one source confirmed and verified the details.

“Therefore, the elected government and state institutions should refrain from targeting the messenger, and scapegoating the country’s most respected newspaper in a malicious campaign.”

#ISLAMABAD: “The latest attack on ⁦@asmashirazi⁩ manifests this government’s increasing disbelief in press freedom in the country and warrants a serious reprimand to stop it from completely taking journalism out of Pakistan.” fnpk.org/pm-khans-go…

#FreedomNetwork is taken aback by online harassment of @asmashirazi through ruling party’s @Twitter account. We hope @ImranKhanPTI will honour his commitment to upholding #PressFreedom #journalismisnotacrime

DIGITAL PAKISTAN MONITOR report by #FreedomNetwork for September 2021 is out fnpk.org/digital-pak…

PAKISTAN MEDIA MONITOR report by #FreedomNetwork for September 2021 is out fnpk.org/pakistan-me…

Latest threat data report by #FreedomNetwork for September 2021 is out. Unique ways to extract info from journalists fnpk.org/journalists…

Journalist #ShahidZehri is killed in bomb blast in Hub district of #Balochistan #FreedomNetwork condemns murder of journalist and demands @jam_kamal to bring perpetrators of this heinous crime to #justice #JournalismIsNotACrime pic.twitter.com/REFO…

JOB OPPORTUNITIES In reference to Freedom Network advertisement placed on Facebook and Twitter on 8 October 2021, please click the link given below to read ToRs and qualification required for the stated positions Freedom Network created for its short-term project. twitter.com/pressfre…