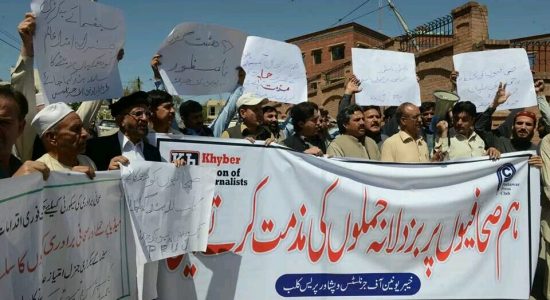 Eight journalists, all from electronic media, were attacked and injured in line of duty and all of them in Sindh province only while two received verbal and written threats and one was booked and another had firing on his residence during December 2017. Pakistan Press Club Safety Hub Network, managed by Freedom Network, documented these violations.

ASSAULTS/INJURIES: Nine journalists – most of them from electronic media – were attacked and injured in line of duty. Eight of these attacks and injuries cases were reported from Sindh and five of these journalists faced the attacks in Hyderabad district.

Four cameramen of different TV channels faced police wrath after they began filming a “drunk” cop dancing in Sukkar on December 9. “The cameramen were filing the dancing cop when his colleagues attacked these cameramen,” a local journalist told Karachi Press Club Safety Hub coordinator. Usama Talat of Geo News, Jang newspaper’s photographer Salman Ansari and Qazafi Shah received injuries but they were not life-threatening. Local police booked the cops who attacked the journalists after journalist community protested the unwarranted attack.

Arshad Baig of Express News channel was attacked after he made footage of accused trying to run away from City Court premises in Karachi on December 24. Local lawyers snatched his mobile phone he was using to film the accused and locked him in Bar Room for an hour. He was freed after other journalists intervened.

Muttahida Qaumi Movement MPA Anwar Raza attacked TV crew covering demolition of “illegal” marriage hall in Karachi on December 4. Two FIRs, one each by officials of Karachi Development Authority and another by Dunya News bureau chief against the MPA.

ATTACK ON HOME: Unidentified persons fired shots at residence of Geo News channel’s crime reporter Imran Chaudhry in Multan city on December 22. The journalist told Lahore Press Club Safety Hub coordinator by phone from Multan that he did not have “any enmity” with anyone nor did “receive any threat” from any group. Local police registered a case but made no arrests yet. Imran expressed “satisfaction” over the police investigation so far.

WRITTEN THREAT: Express News channel’s senior reporter Naeem Asghar “threatening letter” from banned Hizb ut-Tahrir on December 23. He told National Press Club Safety Hub coordinator in Islamabad that he immediately informed local police and senior officials deputed some cops to guard his home. The police, according to him, asked to register a case but the journalist refused. Hizb ut-Tahrir is an international, pan-Islamist political organization, which describes its “ideology as Islam”, and its aim is the re-establishment of “the Islamic Khilafah” or Islamic state. The organization is banned in Pakistan.

VERBAL THRAET: Dawn News channel’s crime reporter Hasan Farhan received verbal threat through “telephone call” from “unknown number” on December 17 in Peshawar. He brought the issue into police knowledge and it acknowledged by sharing a “do-list” to “stay safe.” The journalist told Peshawar Press Club Safety Hub coordinator that his two recent reports might have caused the “threatening call.” The police made no efforts to protect the journalist. Peshawar Press Club Safety Hub contacted the journalist to extend all possible support to him.

LEGAL CASE: Gulistan-e-Johar Police Station in Karachi registered FIR against senior journalist Shabbir Usmani under PPC Sections 448, 34, 380 and 506-B. The FIR was registered on the complaint of a local madrassa. Before the FIR, the journalists “received threats” from the same madrassa management.