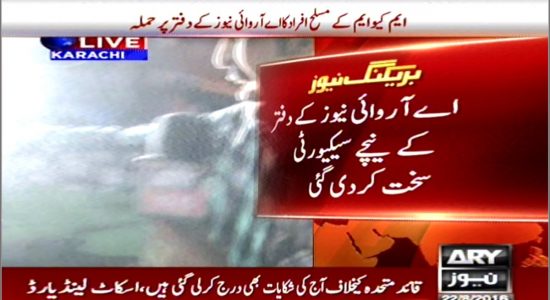 The journalists of six mainstream independent current affairs televisions channels in Pakistan, the office of one of the channels and the Karachi Press Club, came under a brazen attack in the country’s largest city on August 22, 2016 after the chief of a political party instigated its workers to violence against media and they immediately went on a rampage.

The organized violence, much of it caught on camera, ended up killing one person and hurting several people including the at least the camerapersons of Samaa TV, Neo TV, Channel 24, ARY News, Dunya News and 92 News sparking concern and outrage among the media circles and civil society across Pakistan.

The provincial government and security establishment acted quickly and arrested dozens of the alleged attackers as well as some key national parliamentarians and provincial legislators of Muttahida Qaumi Movement (MQM).

“The latest targeting of media houses and media practitioners is criminal behavior and there should be zero tolerance for this,” Freedom Network [FN], the Pakistan-based media watchdog said in Press Freedom Alert on August 23, 2016.

“We are encouraged by the swift response of the Sindh [provincial] government and [paramilitary force] Rangers in defense of the media houses and journalists and their firm declared commitment to extend them full protection,” the statement said.

“While the deployment of security personnel by the official authorities at most media houses in Karachi immediately after the brazen attacks is welcome, we demand that perpetrators of the attacks against media be brought to justice at the earliest, including prosecution and punishment, so that impunity of crimes against journalists and media can be effectively combatted,” FN said.

Noting the distinct united response of the representative media and journalists associations, including the Pakistan Broadcasters Association, Council of Pakistan Newspaper Editors and Pakistan Federal Union of Journalists, Freedom Network said this unity against attacks is welcome and will make the media stronger in its aim to combat impunity resolutely.

According to details shared by the Karachi Press Club Safety Hub Manager with Freedom Network, private TV channel ARY News came under attack from supporters of MQM in Saddar area of Karachi after party leader Altaf Hussain delivered a speech on telephone from London asking his party workers and supporters to attack the media houses.

Among those injured included two reporters and four cameramen from ARY News, Samaa News, Dunya News, 92 News, Channel 24 and Neo TV by a charged mob comprising MQM cadres. The conditions of all injured journalists, however, is stated to be out of danger.

ARY News tweeted on its Twitter handle – @ARYNEWSOFFICIAL – that “armed MQM workers attack ARY News office in Saddar, Karachi.” The channel reported that the protesters were “members” of MQM and that they entered the building and attacked the staff.

MQM chief Altaf Hussain, according to the TV channel, in his speech earlier in the day told his supporters “to storm the offices of TV channels” for not providing him and the party ‘proper coverage.’

Pakistani media is not telecasting live speeches or showing images of Hussain, who is a British citizen now after going into exile in the 1990s to evade criminal charges, after a Lahore High Court order in 2015 banned his coverage over alleged violence against his opponents in Karachi.

In an official response, MQM denied any violence against media had been ordered. “People were protesting peacefully at ARY office against biased media coverage when suddenly police started firing on peaceful protestors,” party leader Wasay Jalil said in a statement.

“We will protect media and journalists,” Shah told Geo News channel. “The attackers will be made to pay for their wrong deeds,” Akbar said in a statement issued later in the night.

Prime Minister Nawaz Sharif also later condemned the threats and attacks against media houses calling these moves as “an attack on freedom of press and expression” and pledging full protection.