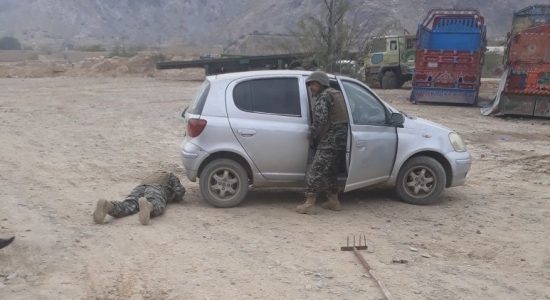 This piece is eyewitness account of arrest of five tribal journalists and office boy of Landikotal Press Club in Landikotal town in Khyber tribal region near Peshawar. The author’s identity is kept secret to help him safe from any reprisals from authorities as they were told to “shut mouth” after release.

“On Friday, November 24, I went to Landikotal Khyber Tribal Agency for the coverage of 8th Annual Vintage/Classic Car Rally for which we were invited by the Frontier Corps (FC) Khyber Rifles wing. The rally was planned to pass through the Khyber Pass to Karachi to show return of Peace after completion of “Khyber 04” Military operation against the militant groups.

“At 11:30am, I moved in a car along with my four other colleagues from Landikotal Press Club to the rally start point – Charvazgai area of Landikotal – to make rally’s visuals. When we reached the point, another colleague who was already there called us that there is something attached beneath our car. We stopped the car and rushed out. When we looked beneath the car, an IED (improvised explosive device) was attached. We informed security personnel who were standing nearby to protect the rally. They called bomb disposal squad (BDS) and cordoned off the area and the BDS staff defused the bomb.

“On this occasion, security officials took us in a vehicle and shifted to Landikotal Army Garrison for investigation. Meanwhile, I texted message to my immediate boss to inform him of the situation. My boss called me back and as I was explaining situation security personnel stopped me and snatched our equipment and we were sent to the lock-up.“At 3:00pm, they fully covered our faces and shifted us to torture cell. They started investigation individually and put us on the floor in open air, they called us one by one to the room of torture cell, I responded to all questions.

“After completion of interrogation, they also brought the office boy of Landikotal Press Club and two other persons for interrogation. They started beating up two other persons and our office boy and then our colleague Khalil Afridi who was driving the car. They tortured and beaten up by with Electric Lashes. We could hear their cries and this was the most difficult time for me as I was waiting for my number. I sat for almost six hours with face covered. I requested armed guard standing by me that I have problem taking breath, kindly loosen the cover to take normal breath but he refused and ordered not to move.

“We were not allowed to talk to each other. We were neither given water nor allowed to attend washroom for six hours. I cannot forget such these horrible movements. When my turn came I was asked questions in harsh words and abusing language was used? I replied all questions. Fortunately they didn’t beat me an safe from electric shots , After the interrogation, they lifted cover from our faces allowing us to watch the torture cell. . It was a small with a table and chair, cameras, and torture equipment. A security personnel told: ‘A lucky person will escape safe from here.’ One of my colleagues and press club office boy who were badly beaten up were laying on the floor of torture cell. The interrogators gave us a type of cream to rub on the back of colleagues who were treated badly. They were in critical situation.

“At that time, a security official also entered our data, photograph and took biometrics in a computer, prepared our documents, signed some papers and  then we were sent to the lockup again where at 11:30. Out of six – five journalists and one office boy of press club – four were asked to go and held back the office boy and Khalil Afridi. At 12:15Am on November 25, they handed over our equipment and dropped us near side gate of Landikotal Army Garrison in Landikotal. We walked homes by foot.”